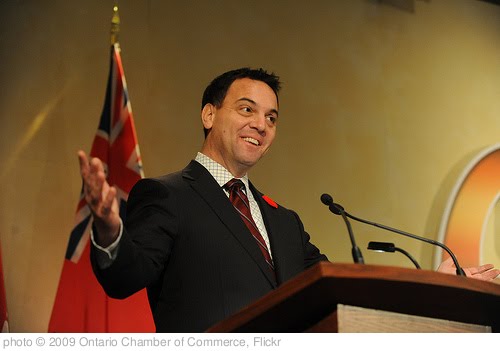 Ontario has just commenced a provincial election.  Normally, I don't write very much about politics, but PC candidate Tim Hudak scares me. In typical PC style, his vision of law and order involves exploitation.


Today, Ontario PC Leader Tim Hudak announced that a PC government would require inmates at provincial facilities to give back to society and work up to forty hours per week of manual labour.

If elected on October 6, a Tim Hudak government will end the practice of letting convicted prisoners spend their time watching TV and will require work programs to be mandatory.
Under Dalton McGuinty, prisoners in Ontario are given perks like “Freeing the Human Spirit” yoga classes, writing workshops, cooking classes and premium cable television with high definition channels. While Dalton McGuinty allows taxpayers’ money to pay for perks, work for prisoners is voluntary.
An elected Tim Hudak government would:

“We’re not asking convicted prisoners to do anything more than what hard-working Ontario families do every day: work.”
– Tim Hudak, Ontario PC Leader

“Prisoners, through their own actions, have taken enough from society. It’s time they give something back.”
– Tim Hudak, Ontario PC Party Leader (source)

Uh huh punish the baddies.  This kind of rhetoric is always popular during elections. Hudak is preying upon the resentment that working class and declining middle class are currently experiencing.  Giving them a group of people to actively exploit helps to distract them from the way in which to the top income earners continue to impoverish them.  Though the gap between rich and poor in Canada is not as wide as in the U.S., the gap continues to grow each year.

When we look at the prison system we look at all of the so-called perks that the inmates are receiving i.e three hots and a cot but never consider what kind of person we hope that the become during their period of incarceration.  Some would be happy if inmates slept on the floor and received meager rations.  The truth of the matter is that the majority of inmates do not spend their entire lives in prison and if we expect them to leave prison and be functional members of society, we cannot treat them like animals during their incarceration.  Recidivism continues to be a problem, not because prison isn't terrible enough, but because we don't give people with prison records a true second chance.

Hudak even went as far as to state, "criminals in Ontario prisons are given perks like “Freeing the Human Spirit” yoga classes, interactive writing workshops and crock-pot cooking classes," as a way to stir up public support for his plan. Yoga will help to keep them in shape and it is an exercise that they can do in their cells.  Combined with things like "freeing the human spirit," it will help them achieve a wholeness of mind and body, as well as teach coping skills.  This is a life skill that they are going to need when they re-enter the public domain. Crock-pot cooking lessons, also fall under the category of life skill.  If you cannot afford proper housing, which most inmates will not be able to do when they are released cooking food is extremely difficult, thus forcing them to consume high fat, high sodium, high calorie food that is quick and easy.  A Crock-pot means real healthy ingredients prepared in one pot that only requires electricity. In the long run, the more life skills inmates receive when they are incarcerated, the better prepared they will be to re-join the public.  It seems to me that Hudak would rather have a revolving door prison system than foster a system in which inmates learn the skills they need not only to properly care for themselves but to be active members in society.

Forcing these inmates to work without paying them for their time is slave labour.  In this case it would be the institutionalization of slave labour because it would be a program led by the government.  When we consider that POC are over represented in the penal system due to racism, this adds yet another problematic element to Hudak's proposal.  Without doubt, White led government, businesses and citizens will be the ones to benefit from the forced labour.  Hudak isn't even suggesting teaching a trade like mechanics, air conditioning/heating, welding etc whereby at the end of the sentence the inmates would at least have a marketable skill. No, instead he is suggesting straight manual labour that will give them nothing to return to society with. These hours worked will not count towards unemployment and they most certainly will not count towards CPP.  There is no justice in this plan. Instead, Hudak proposes that inmates be given "credits they can use for rewards such as television time, coffee, and gym time".

It disturbs me that anyone middle/lower class could possibly champion such a program.  Because prisoners will not be paid, when they are outsourced, the prisons will be able to undercut any proposal by a business already in operation.  This will mean the loss of jobs at a time when we can scarcely afford to have more unemployed.  Even if public is interested in instituting forced manual labour from the point of view of justice, self preservation should make them think about the way that this program will effect the economy.

All around I believe that this plan is terrible for Ontario and represents one of the many ways that Hudak simply does not think about those who exist without social power.  It would be easy to jump on the bandwagon and support the exploitation of yet another marginalized group; however, it the long run we would be doing even more damage to the fabric of society.  Prisons should be about reform and helping people to be successful when they are released, not about getting a pound of flesh.
Posted by Renee at Thursday, September 15, 2011