Were the Cops Getting To Frisky At The West Indian Day Parade? 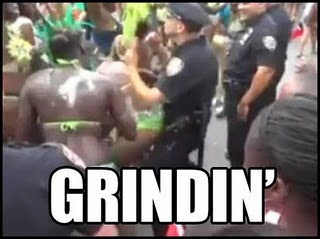 Anyone who is West Indian or has West Indian heritage, will tell you that getting your grind on when the music hits is common and a lot of fun.  When Rhianna did this at carnival, a round of slut shaming quickly ensued. She answered her critics by saying rightly that her behaviour and dress were cultural.  Can police officers who are not of  West Indian culture use this same  repsonse for their decidedly unprofessional behaviour at the West Indiant day Parade in New York?

[T]wo other apparent NYPD officers were all too willing to get frisky. They can be seen on the video aggressively play-thrusting their pelvises up against the backsides of at least two women, gyrating to the beat.

Everyone in the video - including at least four cops in uniform and scores of revelers - is laughing and having a good time.

But NYPD bosses don't think the video is very funny.

A police investigtive unit in Brooklyn has been ordered to look into the video and the cops who are seen dancing on it, sources said. (source)

Dancing the way they were, there is no way that the cops were actively observing the parade to make sure that everyone was safe however, everyone was laughing and having a good time.  The women approached the cops, they didn't seek them out and so the agency of these women also need to be respected.

I know how easy it is to get caught up in the moment but as a police officer this is not supposed to happen.  On the other hand, this could possibly be looked at as a case of unofficial community outreach. The NYPD does not have a good history with the Black community but these officers laughing and partying right along is friendly and not adversarial for a change. They are participating in a cultural tradition and enjoying themselves without being threatening.

So as you can tell other than laughing at their inability to stay on beat, I really don't have a clear opinion on this one.  Do you think that the officers were way out of line and are deserving of some kind of penalty or is this case of alls well that ends well for you?