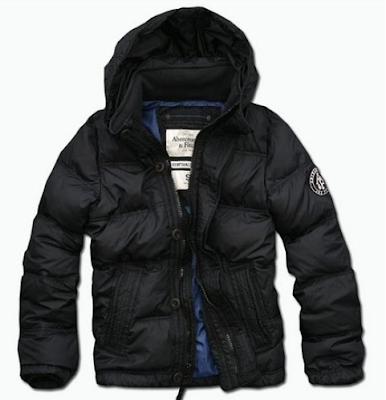 Now that the weather has started to change, my fibro has been flaring on a semi regular basis.  My family doesn't stop needing me and everyday items because I am hurting.  To the best of my ability, I have to find a way to service their needs while taking care of myself.  One of the first compromises I made is to start online shopping. Once it gets cold, when they need anything, I hop on ebay to see what I can find, if it is a need that can wait a week or two to be fulfilled.

Destruction is growing like a weed yet again, and has managed to outgrow last years winter coat.  It is useable for now but he certainly cannot wear it for the entire winter.  I took his measurements and we hit ebay to find him a new winter coat.  There was plenty to choose from, but he really fell in love with a coat from Abercrombie & Fitch. The first thing that I noticed was the size and the price and so I initially said yes, I will buy you that coat, but then after looking at it for a while, I discovered that it was an Abercrombie & Fitch coat, and I couldn't in good conscience spend a single cent of my hard earned money to support a company that has so little respect for marginalized bodies.  Even when I considered the fact that buying from ebay means that an individual, rather than the corporation reaps the profits, the fact still remains that the AF logo was on the side of the coat, thus turning the wearer into a billboard to advertise the company.


Sometimes no matter how hard you try, you cannot circumvent the horrible policies engaged in by various corporations.  I immediately regretted that I had yes so quickly to the purchase because I hate to disappoint my children.  In the end we sat down and had a conversation about Abercrombie & Fitch and how their business practices are harmful to historically oppressed people.  The one thing I can say without doubt is that they are equal opportunity haters.  I asked Destruction how he felt about wearing a coat from a company that is more than happy to take his money, but would be less than enthusiastic about hiring him when he grows up.  I pointed out that just wearing the logo is an expression of support for their exclusionary policies.

The tough part about all of this is that I know that our refusal to support Abercrombie & Fitch does not mean a thing to the bottom line of this company. Someone somewhere is still going to buy this coat and wear it in public.  Someone is not going to think about the harmful nature of Abercrombie & Fitch's past actions, and instead focus on whether or not the coat looks good on them and how it makes them feel and this is exactly what I told Destruction.  So why make this decision when it will not make a a huge change?  Well, for me the answer is very simple, I will know.

In the end, we have a set of morals that we choose to live by not because they are popular, or because we want attention, but because we believe that they are right.  Sometimes it means speaking up, and sometimes it means forgoing things that we want, because the cost is far more than the price tag of the item.  I don't know that Destruction understood everything I tried to share with him yesterday but I do hope that I have taught him that beyond speaking up when he hears bigotry that we can also choose non-participation as an act of support and or rebellion against the status quo.

I know that my decision fit our family morals, but at the same time, I also worry about the fact that he is at the age where fitting in is so very important.  Even the smallest amount of difference is enough to be a source of ridicule.  Every Friday, his school has hot lunch day where parents can purchase, pizza, spaghetti, or chicken fingers and french fries.  None of this is healthy and when I asked Destruction if all of the kids buy the hot lunch he said, "yes, except for Michael (note: not his real name) because he is poor".  Destruction has already been bullied because of his weight and his race, and the last thing I want to do is to put him in a position where he stands out even more.  I worry about the balance between making sure that he is aware that social consciousness is important and the need at times to conform as a matter of self preservation.

In the end, he chose another coat that was similar to the Abercrombie & Fitch coat, that came without the negative social consequences.  I ended up paying slightly more, but I can rest easy knowing that he is not walking around as a human billboard for a company that I detest.  Part of raising my children to be socially conscious individuals, is to show them as many strategies as possible to negotiate their marginalizations, as well as diffuse their privilege when necessary.  No one individual act can change the world, but hopefully if enough people make socially conscious choices, we can start to move towards a better tomorrow.

When it comes to shopping what social issues have you discussed with your children and what do you deem the most important message for them to internalize as consumers? For non parents, what companies have you boycotted and why, also do you believe that it is important to make purchases based on social justice isms?