Of Course Bill Maher Defended Hank Williams Jr. and in The Process Doubled Down on the Ignorance and Hatred

Recently, Hank Williams Jr. was permanently suspended because he chose to compare Barack Obama to Hitler.  In my opinion, the moment someone decides to references Hitler in a debate, they have lost the argument. Once again proving that a douchebag will always remain a douchebag, Bill Maher decided to weigh in on the debate, and in the process compound the ignorance and hatred of Hank's original statement.

Speaking of rednecks who got in trouble, Hank Williams Jr., did you see this?  [He] got his ass kicked off of Monday night football (audience applauds) wait. His crime was comparing Obama to Hitler on Fox news, or as it used to be called, The Glenn Beck Show.  I don't agree with that - you know I'm a free speech guy. I've been kicked off tv before, I don't care. I don't agree with Hank Williams on what day it is, but I don't think you should get kicked off tv just for expressing yourself and I ask you America, if we're going to fire every southern hillbilly who thinks that Obama is like Hitler, who will be our Republican congressmen?  Who will work at our waffle houses?  Who will hunt at our nigger head ranches? I ask you ladies and gentleman.

Look if your missing Hank Williams Jr., you will still be able to hear his music wherever women are assaulted on pool tables. I thought we said no booing. Didn't we go over that before?

Clip switches to Maher and his panel. 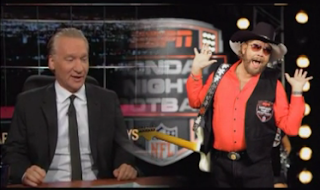 Let me ask you about Hank Williams Jr., because I am defending this guy. This is the difference between liberals and conservatives. When The Dixie Chicks said something they didn't like, oh they burned their records, steam rolled them and they had to go away.  I think we say look, what is it a big story, a shock that this guy is a redneck? No.  And we dug up one of his songs and think this one was from 1989.  Oh look it, boy does he look gay there.  Hank Williams Jr, it's called If the South Would've Won. Let's just look at the lyrics of this song. We highlighted some of the things you would have imagined if the South won:
Panel: He's joking; who's against that.

Maher: No, no he's not joking, he wants any of these things.  He really wants a supreme court in Texas. Killers getting off free, we're going to put an end to that. Uh the capitol is in Alabama now; we take Miami back.  Throw all of the pushers in the slammer. The whiskey would all be from Tennessee, the treasury would be in Mississippi. I love this one, "all the cars made in the Carolinas and I'd ban all of the cars made in China."  Yeah all those Chinese cars that are filling - how many have a Chinese car? For a song about what woulda happened if the South won, didn't he leave out one thing? I can't put my finger on it.  What would be different?  What one thing would be different if the South woulda won? Okay, Elvis' birthday, the capitol in Mississippi, cars not from China, what one thing?

Panel: Mr. Barack Obama would not be president

Maher: He would not be free.

Bill Maher is the text book definition for faux liberal douchebag asshole, though Ricky Gervais and Pierce Morgan come a close second and third. Having been kicked off television once, Maher is hardly unbiased in this situation.  He is defending Hank under the guise of free speech; however, the problem with that is what Hank said rises to the level of hate speech, and so does Mahers defense.  Let's keep it simple and start off with Hank.

Hitler was responsible for mass murder of millions of people. They were comprised of Russians, Poles, Jews, GLBT people, political dissidents, and the disabled.  He oversaw the building of crematoriums and those that weren't gassed immediately, were worked and starved to death.  That is just in the camps.  His war of aggression saw the death of millions of civilians and military, and resulted in one of the most bloody wars on the European continent.  Think of the millions that died in the standoff of Stalingrad alone. One may find fault with Obama as a president, but he has not risen to anything comparable to Hitler and furthermore, to suggest that he has is Anti-Semetic, homophobic and disableist. It discounts everyone who died because of Hitler and this is why what Hank said was without doubt problematic. Hitler's compatriots are people like Pol Pot, Stalin, Rafael Leónidas Trujillo Molina, Alberto Fujimori, Idi Amin Dada, Slobodan Milosevic etc., and certainly not Barack Obama.

In his defense of Hank, Maher decided to say that he looked gay in an image that he found.  What exactly does looking gay mean?  Since when can you immediately look at someone and know without a doubt that they are gay?  That comment is heterosexist and especially so, because he used the word gay specifically to attack Hank.  When Maher called Hank gay, he might as well have used a slur, because that is exactly what his tone implied.

In his monologue, Maher once again decided that it was appropriate for him to use the word nigger. Of course he was only joking, and so I suppose the listener was supposed to see this as no big deal; however, this is not the first time he has used this word, nor the first time he has made a racist statement. Despite his repeated fails, this man has the nerve to refer to himself as liberal, but then that's a classic label for White men of class privilege to shield their unacknowledged privilege.  I love that he had the gall to point out that Hank Williams Jr. ignored the harm of slavery, just minutes after uttering one of the worst words that one could possibly attach to a Black person, but yeah -- he's so much more tolerant and understanding than Hank.  There is no reason for a White person to ever utter that word; it is absolutely indefensible.

It disturbs me that men like Maher continue to be thought of as liberal, or as espousing an equality minded approach to social justice.  Maher in particular, continually ignores his various privileges to promote sexism, racism, Islamophobia etc and somehow he is the voice of reason?  What a fucking world.  It further troubles me that men like Maher are the ones given the platform to speak to the masses, because the fact that his language is coded as liberal, means the many isms which he perpetuates are given a pass.  There is no benign way to engage in any ism, and rather than being a part of the solution, he is most definitely part of the problem. Furthermore, coding the isms he perpetuates as a joke encourages people to ignore the seriousness of the impact they have on marginalized bodies. This is why it is hardly a surprise that Maher would defend, Hank.  When they both benefit from many of the same privileges, what incentive is there to demand real change?
Posted by Renee at Tuesday, October 11, 2011