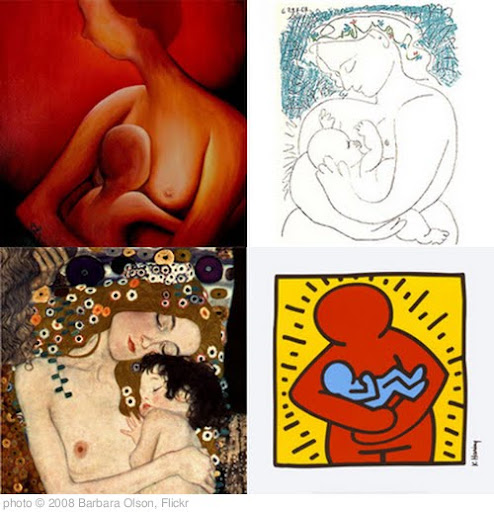 I basically stay out of the mommy wars, though as a mother of two, I clearly have a vested interest.  I don't participate, because I know that the White women who banter back and forth are not capable of seeing things from a perspective other than their own -- and that just like far too many see the category of woman as monolithic, the same can be said of their views of the experience of mothering.

Twisty of I Blame the Patriarchy recently wrote a post that pissed me off to the point that I have decided to throw in my two cents. Let's examine an excerpt.


Yo, mothers, we really understand. Really, we do, because our fists are tired, too. The maddening antifeminist zeitgeist is exhausting us all. It’s just that we — and when I say we, I mean those blamers who see the nuclear family as an enormous obstacle to liberation — are desperate for women who are living the status quo to challenge the status quo. We are desperate for women to reject the specious narrative that within the nuclear family we have “choice,” when in fact the “choice” (regarding motherhood) is between doing one full-time job (stay home and raise kids) or two full-time jobs (do paid work and also raise kids).* We are desperate for women to stop buying into the patriarchy-sponsored message about women’s fulfillment — that is, the notion that you are a selfish blob of failure, or worse, that you are missing out on life’s greatest joy, if you don’t martyr yourself to home and family and totally subsume your identity in the process. We want women to reject marriage and the nuclear family. We want women to not have kids in the first place. But above all we want women who do have kids to realize that, despite our critique of the traditional feminine behaviors in which they are encouraged — by forces larger than feminism — to engage, we’re on their side, because ain’t they women? And ain’t we for the liberation of women?


A feminist revolt will improve the lives of all women, and all kids, too.

That’s right! We want the mothers to step up.

No readers, Twisty doesn't get a fucking thing, not one fucking thing about what it's like mother from the margins.  All she can see in this debate is working vs staying at home, and sticking it to the patriarchy.  Well wouldn't it be fucking nice if that were the only problems marginalized mothers have. It makes me want to hunt down some printing services, so that I can get flyers made to say, motherhood is not a fucking monolithic experience, stop essentializing us.

When White women give birth, their babies are wanted and adored, and we, and by we I mean mothers of color, still have to fight for the right to be pregnant and reproduce, without being thought of as irresponsible broodmares.  Here's a binary you can sink your teeth into: White women are mothers, and Black women are irresponsible jezebels, having kids to get more welfare money. That's the way the world really views our pregnancies, and yet Twisty seems to think this is all about gender and sexism. Will radical feminists ever get a fucking clue that there is more to women's experience than gender and sexism?  That little play on Ain't I A Woman by Sojourner Truth is extremely offensive, considering that radical feminism has a distinct history of ignoring the role that race plays in the lives of WOC. Yeah, I caught that, and I am most certainly not amused.

Just raising a kid in a family is challenging the status quo for many Black families.  Of course, it may seem like the norm to Twisty, because she doesn't come from a history of Whiteness selling husbands away from wives, and ripping children away from their mothers arms to earn a fucking buck, and that's just Black women.  What about the so-called friends to the First Nations people who thought it would be a good idea to send Indigenous kids to schools to divorce them from their traditions, culture and heritage?  Apparently White women know more about how to raise our kids than we do.  Then of course there is the history of forced sterilizations of Latinas, Indigenous women and Black women to confront.  We didn't have a gilded cage that trapped us.  We were working to put food on the table and clothes on the backs of our children, trying desperately to raise them, when we were allowed to have them that is.

No, White radical feminists are not on our side. They are a part of the problem because they can't see past their own Whiteness long enough to see that their story is not our story. Do I really have to remind them that they were only able to have their consciousness raised, because we were watching their damn kids? Do I really have to point out that ever step they have climbed towards equality with White men has been because they have been standing on our shoulders?

Right, so we need to turn our back on nuclear motherhood because this emboldens patriarchy.  Hmmm did it occur to her for one moment that the woman most likely to have a choice to stay home and raise their children is a White woman and not a woman of color? Did it even occur to Twisty that this choice in and of itself is a reflection of White supremacy?  Unlike White children, the world is perfectly happy to undereducated Black children, incarcerate them and see them hooked on drugs. Not all mothering is equal.  Because my children are of color, it is doubly important that I raise them to be socially aware people, with a strong sense of self.  I cannot afford to slack for one moment, because their father and I are the only safety net that they have. White women don't have to lie in bed and worry that a trigger happy cop is going to mean the death of their precious child.

Finally, who the fuck is she to assert that our relationships are crappy.  In a world that tells Black women that we are unlovable and exist only to be fetish fucks, what Twisty had to say only builds upon this notion.  Though our self worth should not be based on the relationships that we enter and or maintain, I believe it is important to validate that Black women are entitled to happy loving relationships however they manifest. I had the fortune of being raised in a family in which my father loved and respected my mother, and it set the model for the type of relationship that I came to expect in the future. My partner loves and respects me and most importantly, we are a team.  I am sick and tired of the whining of unaware White women on this issue.

There are always going to be women who don't want to partner with a man, or have children, but those of us who do are not betraying other women -- we are choosing to live our lives in a way that makes us happy.  Women that mother from the margins don't have time to help clueless twits with their little agenda, because we are too busy trying to prepare our children for the obstacles in their path, while getting our status of mothers to be considered socially acceptable.  White women may see motherhood as a gilded cage from which there is no release, but we aren't even seen as mothers and our ability to nurture is only deemed valuable, when we are changing their children's behinds. Motherhood can be a site of change and activism.  Even as we empower our children to think critically about the world in which we live, we are actively creating a better world, because each child raised this way will be less tolerant of the coercive hierarchy that abounds socially.

Finally, I think it is worth noting that I wrote this piece specifically from my position as a Black mother; however, there are plenty of other sites of oppression that effect our ability to parent.  Disabled mothers  have a unique experience as well. We also have a history of sterilization, based in the idea that we are naturally unfit to parent. Even when they are no reported abuse or neglect issues, disabled mothers are attacked and threatened with the removal of their children.  Lesbian mothers have issues specific to them, and they most certainly do not fit into the framework of the patriarchal family.  As long as you belong to a group that is historically marginalized, and claim more than one site of oppression, motherhood is a complicated endeavor, and so the very idea that it should so easily be reduced is beyond offensive.
Posted by Renee at Monday, October 24, 2011