The Walking Dead Season Two Episode Three: Save the Last One 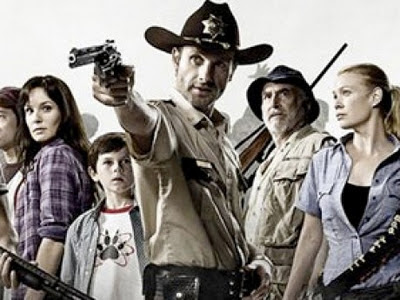 This episodes with Shane and Otis running from the walkers and Rick and Lori sitting vigil over Carl's sick bed.

In the trailer Carol is crying, as Andrea sits at a table trying to assemble a weapon.  Darryl clearly cannot sleep with the noise and so he gets up taking his clip from Andrea, saying that he is going to walk the road to look for Sophia.  Dale questions whether or not this is a good idea, because it is still dark but Andrea quickly cuts him off.  I thought this was a nasty thing for Andrea to do and Dale did have a point about safety issues.

When Andrea questions whether or not Sophia is alive, Darryl tells her that when he got lost as a child while his father was in prison, and his brother Meryl didn't even know he was gone.  He believes that Sophia has an advantage, because she has people looking for her.  When they run across a man who tried to hang himself to escape, but became a walker because he didn't know enough to shoot himself, Darryl asks her if she wants to live, Andrea answers that she does not know.  To keep his promise he shoots the walker with an arrow, and then complains about it being a waste of an arrow.  Is it me, or does Darryl not have a history of taking back his arrows after he uses them?  How is it a waste when he could have removed it from the walkers body?

It looks to me like they are setting up Andrea and Darryl for a romance, which is actually quite sad.  If you have read the comics, you know that Andrea and Dale really loved each other.  Their relationship was good even though Dale had insecurities regarding the large age difference between them.  Does anyone prefer Andrea with Darryl over Dale?

Back at the school, Shane crawls through a window and falls from about two stories to the ground hurting his leg. Even though IMBD says that Shane is going to be in all of the episodes this season, I kept hoping that he would fall on his head. No such luck, and Shane lives on.
Read more
Posted by Renee at Monday, October 31, 2011