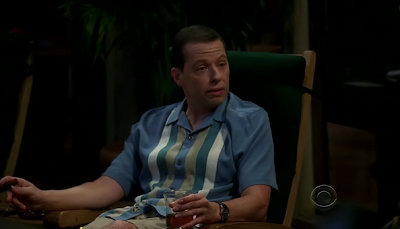 Even when megadouche Charlie Sheen was the star of 2 1/2 Men, I was not a fan of the show.  I occasionally catch an episode, when the unhusband is watching the show.  Last night's epsiode served as proof that even though Sheen has left/been fired, the writers are still determined to present a hot mess of isms as comedy.

The season opened with the funeral of Charlie Harper.  From what I can tell, this new season has focused on how the characters adjust to the loss of Charlie.  This week, Charlie's brother Allan Harper, has one can only be described as a mental break.  Alone, he says, "I never told you while you were alive, but I would have given anything to be like you, even for a day".  Moments later he begins his break with reality and this escalates as the episode progresses. This involves sleeping with a beautiful woman that he does not know, smoking cigars and drinking bourbon, and even wearing Charlie's clothing. Clearly this a form of depression based in grief, and is an extremely serious matter - now everyone laugh at how silly he is being.

I am not one that believes that grief cannot be turned into something to find some kind of joy, or even comedy in however, turning mental illness into a joke for ratings is disgustingly ableist. At the end of the episode, Walden Schmidt, played by Ashton Kutcher, drives an unsuspecting Allan to a mental institution under the guise of taking a trip to Vegas together.  As soon as Allan gets out of the car, Walden drives off, with the tires of the car squealing.  Alone in his hospital room, Allan is still disconnected from reality and so he pretends to call room service. Using his hand to function as a phone he calls room service and requests, "A bucket of ice, a bottle of scotch and two Asian hookers. You know what, they're small, make it three. Winning."


Right, so his sexist reduction of women to commodities that he is free to purchase and the racist assertion that he needs two women because all Asian women are small, is funny because ha ha, he's crazy.  Under the guise of mental illness, it's okay for Allan to be a megadouche. If that were not enough, he ends the statement with the word, "winning," thus channeling Charlie Sheen during what appeared to be a very public breakdown. Yeah, mental illness is all about fun and games.

2 1/2 Men has never been known for it's respect for women and has been more than willing to employ any ism to get a cheap laugh no matter how much this hurts historically marginalized groups.  Obviously, this kind of comedy sells, because even after Charlie Sheen's legal issues, as well as a very public problem with drugs and alcohol, the show still remained extremely high in the ratings.  The current decline in the ratings has nothing to do with isms as comedic, but the replacement of Sheen with Kutcher.

A lot of comedians or comedic shows use isms as a joke.  We often see examples of homophobia, racism, and sexism actively called out, but ableism is often ignored. Ableism is not now or ever will be a laughing matter. It negatively impacts people's lives and serves to other us.  I think that part of the reason that ableism is invisible, is because ableist language is part of our everyday culture. It is nothing to use words like crazy, lame, retard, idiot, moron etc. Even in this space where most of the commenters are very socially aware, I constantly have to watch for ableist language. This is because people don't take it seriously, or make active efforts to adjust their language.  Though slurs like nigger are very much a part of the common lexicon, there is more awareness that it is harmful, than many of the average everyday ableist terms.

Ableist language is a form of violence, because it perpetuates an ism against an already marginalized group.  Even when I say for instance that I find the word lame offensive, I have able bodied people arguing with me. Many quickly point to a dictionary, as though this somehow makes their comments less offensive, and that the issue is my sensitivity, rather than their privilege. This everyday support of ableism is what empowers comedians to further reduce disabled people for a cheap laugh.  Thanks to the medical model of disability, able bodied people already feel invested with the right to police our bodies, and therefore it is not a far leap to suggest that we are too sensitive when we dare to complain about negative portrayals, or cheap comedic routines at our expense.

I for one am not surprised that 2 1/2 Men decided to use ableism for a laugh last night.  The high rate of ableism socially, supports what they did as acceptable.  This episode will go unnoticed with the exception of complaining that Kutcher is no substitute for Sheen once again. Someone might even say that the jokes were lame, because the one thing that we have proven time and time again, is that ableism is acceptable, no matter how much it hurts the disabled community.
Posted by Renee at Tuesday, November 08, 2011