Do We Need a Plus Size Barbie 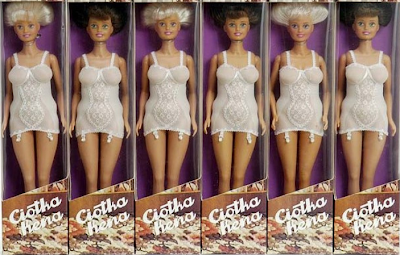 
Daily Venus Diva did some research and found that yes, there are a few plus-size Barbies (and Barbie-esque dolls) to be had.

Turning up in Daily Venus Diva's search was an Effie from "Dreamgirls" doll, whose memorable curves are clad in a glam brown gown; a Rosie O'Donnell Barbie, who wears the sort of baggy blazer the real-life TV host sports; and The Emme Doll, made to resemble plus-size model Emme Aronson (who these days spends her time blogging for us).

Then there's the curious "Ciotka Kena" Barbie, which in Polish means' "Ken's Aunt." Apparently in Poland, Ken has an aunt with voluminous blonde hair and a white lace teddy -- and real-woman curves. A limited edition, "Ciotka Kena" Barbie would most definitely be considered plus-size stateside.

Naturally, Ellie Krupnick posed the question at the end of the piece of whether or not a plus size barbie was actually needed.  Talk about an invitation for people to get their fat hating on. Anytime children can see bodies outside of the norm that aren't being actively stigmatized, this is a good thing.  There was everything from the excuse that these dolls would encourage an unhealthy lifestyle, to the supposition that it would ruin the fantasy of playing with something beautiful.


It is easy to see that the worries are based in outright fat hatred.  A simple glance at the "Ciotka Kena" Barbie (featured above) shows a doll that represents an average size woman and not a plus size woman. It normalizes the everyday experience and how can that possibly be a negative thing for a child to see as normal?  No matter how many times we airbrush models and encourage anorexia as a perfectly legitimately lifestyle choice, the majority of the women are not going to be a size zero.  Isn't the more reasonable response to show a child a plethora of bodies as good and naturally occurring than to elevate a singular body type and suggest that it is the most desirable?

Of course in all of this concern for kiddies, the idea that such a ridiculous standard is actually harmful is erased.  How many young women grow up with an unhealthy body image because we have normalized an impossible standard of beauty?  We teach young women to focus on appearance, rather than intelligence and achievement, but somehow a barbie that represents the body of an average sized woman is harmful because it potentially ruins the fantasy - the very same fantasy that has young women binging and eating.

Socially, the idea that fat women are sexually appealing and destined for celibacy has become pervasive. Fat women are continually erased from popular discourse and the few times they do appear they are the butt of the hoke and not taken seriously. We celebrate weight loss like it is the equivalent of walking on the moon, and posit that something is innately wrong with women who are comfortable in their own skin.  It's almost as though if you are not insecure, then you are not performing womanhood properly. I don't understand why this isn't an ongoing concern?

A fat, or in this case an average sized barbie is a good thing and while they're at it, they should give Ken the exact same treatment, because men have body image issues as well. Everyone benefits when marginalized people are represented, and teaching children respect people that are different than them can only be described as a good.  I don't normally have a single positive thing to say about barbie, and so this endorsement is a first for me.  If I had my way, for every skinny barbie doll, children would be given a fat one as well.


The truth of the matter is the definition of what constitutes woman needs to change.  We have set such ridiculous parameters, that millions of women are "othered", exploited and actively erased every day.  We need to show our daughters, fat women, trans women, women of colour, poor women, lesbian women, disabled women, short women, tall women and every other way in which womanhood can possibly manifest.  We need to teach them that regardless of the self hating messages perpetrated by the media, and every other social institution, that they are wanted and valued for exactly who they are.
Posted by Renee at Wednesday, November 09, 2011