The Fangs for the Fantasy crew are huge fans of Kim Harrison, and that is why this month we are delighted to give away one hardcover copy of: 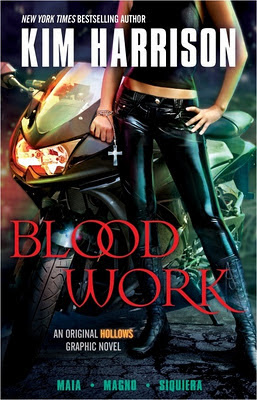 Hot-as-hell, tough-as-nails detective Ivy Tamwood has been demoted from homicide down to lowly street-crime detail.  As if rousting trolls and policing pixies instead of catching killers wasn't baed enough, she's also been saddled with a newbie partner who's an earth witch.  It's enough to make any living vampire bare her fangs.  But when a coven of murderous witches begins preying on werewolves, Rachel Morgan quickly proves she's a good witch who knows how to be a badass.
Together, Ivy and Rachel hit the mean streets to deal swift justice to the evil element among Cincinnati's super-natural set.  But there's more to their partnership than they realize - and more blood and black magic in their future than they bargained for.
Kim Harrison, author of the New York Times bestselling Hollows urban fantasy series, was born and raised in Michigan.
Read More
Posted by Renee at Tuesday, November 01, 2011