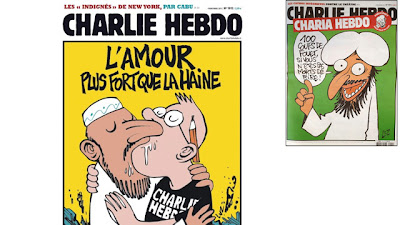 These images really should give one a moment's pause, because there is a lot wrong with them despite the free speech defense that is currently being employed to support them right now.


Last week, the editorial offices of French satire magazine Charlie Hebdo were firebombed after the release of an issue "guest edited" by Muhammed. ("100 lashes if you don't die of laughter!" said the cartoon Muhammed on the cover.)

The magazine's website was taken over shortly after that by a Turkish hackers group, who left a threatening message reading, "You keep abusing Islam's almighty Prophet with disgusting and disgraceful cartoons using excuses of freedom of speech...Be God's Curse On You! We Will be Your Curse on Cyber World!" Politicians and the media came out in support of the magazine's right to free speech, while French Muslim groups decried racism. Amidst it all and against all odds, the newly homeless Hebdo got its next issue out on schedule. Yup! There it is, the new cover, right above us. This is not going to end well. (source)

I know that this is going to piss off the atheists, but defiling someone's religion is simply not cool. If someone is using their religious beliefs to justify bigotry against a historically marginalized group, then I think that we all have a responsibility to speak up, but outside of that, specifically targeting someone based in their religious beliefs is just wrong.  It is well known that Muslims find images of Muhammad to be offensive and tagged with the line,"100 lashes if you don't die of laughter," it is impossible to suggest that Hebo had any other intent.  Even after receiving what is clearly a negative reaction, Hebo decided to up the ante and draw an image of Muhammad in a same sex kiss.  This is supposed to be funny because all Muslims are homophobic right.  We'll just ignore that there are practicing Muslims who are themselves gay or lesbian.  We'll just ignore the texts that they have written and their fight to be recognized.

What Hebo did was turn their struggle into a mockery and at the same time reduced all the efforts of the GLBT community to a cheap talking point.  Now that Muslims are a target, it is useful for Hebo and politicians to use same sex attraction to attack them, but please keep in mind that the government is no friend to GLBT community. If this were not the case, the community would not have an going struggle for basic civil rights. No matter how progressive the society, homophobia is still in practice because heterosexism is a globally institionalized project.

I think what disgusts me about these images, is that they are defended under the guise of free speech.  The whole idea is to point out how intolerant Muslims are, but the images themselves are racist and intolerable.  They prove the opposite of their intent.  The fact that France is an extremely imperialist ethnocentric country cannot be taken out of the equation. Across the country, students are taught the exact same lesson, at the exact same time, to ensure a complete ideological indoctrination.  We often think of the United States as the melting pot, but France is much the same in terms of its treatment of immigrants.  People are expected to think of themselves as French first and above all.  Any failure to properly conform means discipline.  France is also the father of the burka ban under the guise of freeing women from oppression. That this constitutes another form of oppression is ignored and any negative consequences from the law are only borne by the women who are practicing Muslims, and so I suppose it's not big deal right?

None of the aforementioned factors can be erased from Hebo's decision to place Muhammad on their cover in such a clearly offensive manner. It amounts to nothing less than discipline for failing to conform to French social and religious ideals. France is still very much a Catholic country.  It is further not accidental that Middle Eastern people are over represented in the lower economic strata, as well as over represented in the penal system.  For France, Muslim constitutes a spoiled identity.  The very fact that they are in a minority position, means that Hebo is in a place of power and authority. Their actions do not come from an enlightened place, and are actually quite regressive, though it's trendy to pick on Muslims isn't it?

Just because one is of western origin, does not necessarily make ones position enlightened or tolerant, despite the mantra of free speech.  If we are honest, free speech is used to justify all manner of hate speech and active oppression, because people do not want to be held accountable for their hatred.  There may be no laws against what Hebo did, but I hope that the conversation around this at least takes into consideration the racism and ethnocentrism that went into the creation and the defense of these images. Perhaps Hebo needs to apply the adage that "love is stronger than hate" to themselves, rather than asserting this as some sort of indication of the intolerance of group that is a minority and is actively socially "othered".
Posted by Renee at Tuesday, November 08, 2011