A Kiss Isn't Always A Kiss

One of the privileges that I can easily take for granted is my ability to hold the unhusbands hand and kiss him at will.  It's something that I rarely have to think about.  The few times that I have had to consider what we were doing, are directly related to race.  I remember early in our relationship when I was still just the GF a White woman asking the unhusband if he needed help to find a nice White girlfriend, because apparently my race implied that I would cheat on him one day because all Black women are sluts.  Outside of race, I never have to worry that our affection in public will disturb people or that we will be deemed an undue influence on any children that happen to be present.

Recently we have seen an uptick in same gender loving people being asked to leave locations for the crime of kissing in public.  As Sparky wrote in an earlier post, this turns the act of a simple kiss into a sex act. 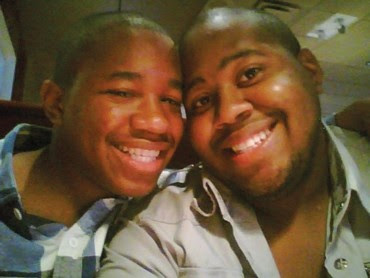 A Chicago Transit Authority bus driver reportedly "yelled homophobic slurs [and] called the police" after a passenger complained about a kiss between a  young gay couple, reports the Windy City Times.

Christopher Buchanan, 22 (right) and his boyfriend Derrell Hughes boarded a 146 southbound bus on Oct 22.  "I was holding his hand and kissing and whatnot," Buchanan told Windy City Times.

As the bus approached downtown, he said, a middle-aged White woman approached the bus driver to complain about the two. The driver allegedly got up and told Buchanan and Hughes that someone had complained about them and that they needed to get off his bus.
"He was really in my face," said Buchanan. "He said 'you bitches need to get off the bus…I can't stand f#gs.'"

"When the couple refused to leave, Buchanan said, the driver called police. Buchanan said that police said they had not done anything illegal, they got off the bus after a two-hour ordeal during which a CTA supervisor was called. "Buchanan said he felt the two were targeted because they were two black men kissing in public. He noted that a straight couple was also kissing on the bus at the time of the incident.

The city of Chicago has extremely high rates of intra-racial violence.  It should have been a blessing to see two Black men loving each other, rather than attacking each other.   All that bus driver felt was hate.  Not only did he yell a homophobic slur at them, he decided to emasculate them by calling them bitches.  Suddenly these two men were not longer considered men, for the simple act of sharing a kiss.

The only crime that was committed that day was by the bus driver.  He openly discriminated against Buchanan and Hughes and he used hate speech to express his rage.  I know that the U.S. does not have the same laws vis a vis speech as Canada, but he had no right to demean these men in that way. It is my hope that this driver will find himself filing for unemployment benefits and not simply shifted to a new area of the CTA, because his actions were indefensible.

Buchanan and Hughes have already hired lawyer to ensure that justice be done in this case but I cannot help but think that incidents like this are exactly why marginalized people die earlier; it's the stress from negotiating every day attacks.  Of course these early deaths are always explained away as the fault of the individual rather than a lifetime of negotiating oppression.


You know, what I find the most disgusting about the uptick in attacks on same sex people kissing is that a kiss in an expression of love.  We have so much hate and anger in this world, that you would think that love would be welcome no matter how it manifests.  Love is what elevates us whether it is a woman and woman, a man and man, a women and a man or an adult and a child.  Love is without doubt the most beautiful of human emotions and instead of trying to crush it because someone experiences it differently than you, we should be embracing and encouraging it.