I debated writing about this issue, because every time some sort of racism or appropriation happens by someone who happens to be GLBT occurs, the backlash in the comment thread here is disgusting.  I am going to say right up front that homophobia, no matter how it manifests is wrong and intolerable.  People should have the right to live their lives free of hate and harassment.  That said, being actively oppressed, does not give anyone the right to willfully appropriate from other marginalized groups.

Christel Conklin and Aimee Whitchurch came home to find the following painted on their garage door. 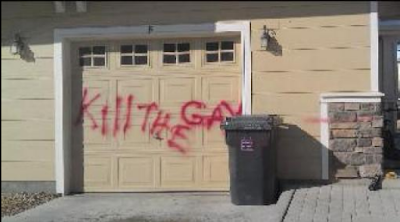 Lesbian partners in Parker say they're the victims of a frightening hate crime. Someone painted an anti-gay message on their garage and left a noose on their doorstep.

“You get words like ‘homos’ or ‘you’re going to burn in hell’ and things of that nature, but ‘kill the gay?’ That’s a threat against our lives so it was overwhelming,” says Aimee Whitchurch.

It’s the message she and her partner, Christel Conklin found on their garage door Friday. One day later, someone left a noose at their doorstep.

“The noose is where it really became shocking and scary,” Whitchurch says.

“Usually in public it’s fine,” Conklin says. “We can go places and be accepted, but living is a different thing. People don’t want you to be living near them.” (source)

Aimee and Christel are extremely brave women.  I don't think that I could stay in a home once my life had been threatened.  I should be writing a post about their bravery in the face of such naked hate, but I simply cannot.  In response to the threat, Conklins said “We’re the white Rosa Parks. We’re not getting off the bus.” That my friends is appropriation.

Rosa Parks as you know became famous when she refused to give up her seat for a White person and move to the back of the bus.  Her action launched the Montgomery bus boycott.  Blacks walked and car pooled for over a year to get the bus company to end its segregation policy.  I can see why Conklin believed that the analogy was justified, after all, Conklin and Parker are refusing to move though being threatened.  The two situations amount to active oppression, but while all oppression is equally bad, that does not make them the same.


This is an example of two White women co-opting directly from the civil rights movement and it is racist as well as appropriation.  While Conklin and Parker are far too intimately familiar with lesbophobia, their Whiteness means that they have no idea the pain involved with racism or Jim Crow.  Segregation based on race is a specifically African American or even person of colour experience.

There are plenty of GLBT heroes that they could have invoked before appropriating Rosa Parks and the civil rights movement however, as know this sort of appropriation has become common place by far too many members of the LGBT movement. Appropriating the civil rights movement doesn't send the message that homophobia must end because actively hating, killing, and oppressing GLBT people is wrong and that they deserve human rights. It says homophobia is wrong because you are treating us like niggers. It says we're White and we don't deserve to be treated like niggers.

There have been countless civil rights movements across the globe and inevitably, some White members of the GLBT community are determined to appropriate the African American experience. No matter how many times Blacks complain about the appropriation, this continues to happen.  What I find astounding about this continuing occurrence, is that homophobia in and of itself is awful.  What happened to Conklin and Parker is horrendous, and no other example should be needed to buttress this fact.  It's almost as though they believe that homophobia in and of itself will not be enough to spark the imagination of the public to address the wrong being done.  If homophobia is to be taken seriously, it needs to be understood that it is a unique oppression faced by the GLBT community that negatively impacts their lives. When we consider the consequences of being out publicly, I fail to see why this is not enough.

Unless you are both Black and GLBT, any comparison to the civil rights movement is appropriation.
You have neither the experience, or the right to take from a community to which you don't belong.  When we consider that Whiteness has a long history of out right theft from communities of colour, this makes the repeated appropriation just one more example of the ways in which White Supremeacy is determined to undermine the efforts of Blacks for equality.  Gay rights is a civil rights issue, but it is not now, or ever will be the same as combating White supremacy.