Race in the Walking Dead 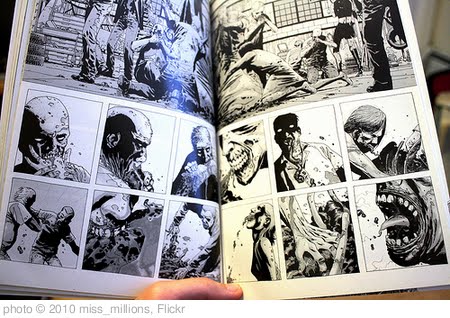 It is hardly surprising that the AMC series The Walking Dead is so incredibly popular given that comic series itself is popular. Going into this series the one thing this show had going for it was an absolutely solid fan base. Part of the problem with developing a television show from an already popular text is that you are given two choices, stick to the script with limited changes a la Harry Potter style, or slightly alter the script adding new elements, while enlarging, or eliminating characters altogether, which is the path chosen by Alan Ball on his work on True Blood. The Walking Dead has chosen to go with the latter which raises the question about whether or not the changes have been positive or negative.

One of the most glaring issues with race we see is the contrast between the original comics and the show. In the comics there were several characters of colour who were active members of the group and in fact, at times, were put into leadership positions. The same cannot be said of the television show, however, and this is evidenced by the absence of Tyreese.

In the comic series Tyreese is a co-leader with Rick. He’s one of the main fighters of the group, he’s one of the people the rest of the group look up to. He is respected, he is honoured, he is a valued and highly contributing member of the group. In many ways he fulfills the role that Shane fulfills in the television series - only without the arseholery that makes us wish for Shane to become a chew toy every episode. Most importantly, Tyreese could be counted upon to share the burden of leadership with Rick, matching him walker kill for walker kill. Tyreese is so skilled that upon being locked in a gym with walkers, her emerges unscathed with scores of kills to his name.

So where is Tyreese? Well, he is very conspicuous by his absence. But we do have T-Dog who doesn’t exist in the comics. If we contrast these two characters we see a marked difference.

What has T-Dog done? Actually done the whole series? In season one, his single action was to be attacked by Merle, and then drop the key that would open Merle’s handcuffs. His one action the whole series was to be abused by a racist and then fumble. In season two? He has cut his arm, was saved by Darryl three times (twice physically and with medicine) and otherwise hung around doing nothing. His injury even rendered him unable to look for Sophia.


Contrast that with Tyreese, the character he replaced. Tyreese was awesome. When Rick needed someone to confide in - his worries, when he was upset, when he needed support, when he needed a second, it was Tyreese he turned to. When there were Walkers to kill, Tyreese was there, with his hammer. When people were upset, Tyreese was who they could always rely on and lean on. He was the backbone of the group - he could literally go into a small room crowded with Walkers and bring them down. Tyreese kicked arse and was an amazing character.

But also contrast T-Dog with the other characters in the series. None of the men are close to as useless as T-Dog. Shane and Rick are leaders and crusaders who protect the group, advise, reassure, plan, save people etc - these two are the glue and hub of the group. They are soul and centre. Darryl is a fighter with impressive survival skills and a silenced ranged weapon. Glenn was useful in the first season for his considerable knowledge of Atlanta (though in season 2, again we see Glenn reduced to a hanger on). Even Dale knows how to use a gun, and is often left on watch, as well as having some maintenance skills to keep the cars going. The only people still alive who contribute as little to the group’s survival are Carol, Andrea (and even then she can fish), Lori and the children (and it’s another trope about sexism that needs addressing there).
Read more
Posted by Renee at Friday, November 04, 2011