There is no excuse for GLBT or Cultural Appropriation 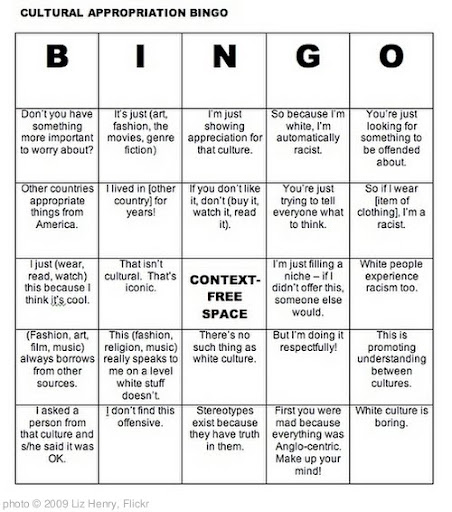 You may have guessed by now that I have a very little tolerance for appropriation.  Recently it was revealed that an author in the m/m genre, faked a gay male identity, which included paying someone to make public appearances with a fake boyfriend, writing a coming out story, and writing about an instance of gay bashing.  This moves beyond the concept of taking on a pseudonym for the purposes of publication and cannot be seen as anything other than outright appropriation.  On Spark in Darkness, this is what Sparky had to say:


I will say that using an identity like this is out of line. When you pretend to be a marginalised body you are claiming an experience you haven't had. At the most basic, this is like putting “Dr.” before your name when you don't have the qualifications to back it. But it's worse than that – because you're not only claiming an experience you don't have – but you're claiming a marginalisation you haven't experienced – your claiming an insight into a persecuted body that you do not have. You are exploiting our persecution for your own gain.

But further, I will say that I am left with the uncomfortable feeling that it's difficult to nigh impossible to find an actual book about gay men written by gay men – especially if it's a romance. There are only a relative few gay male writers in this genre I can say that I know are gay men with any degree of certainty. Oh there are many with male names and many with male biographies – but how can I trust that? How can I pick up a book and know it's my own people's stories and not Julian McHomo, the pan-name of Suzy Nym?

And, yes, that matters. Not because all books with gay male characters written by women are horrible and unworthy (far from it and it was straight female writers in the genre who first saw and called out this particular arseholery) – but because I want to read stories from that experience, who have lived it from men who have been there to a man who has been there (and from men who have been there to young men and teens who are there and are going to be there). So please, ye gods, please don't dismiss this, don't say “it doesn't matter whether the author is straight or not” because to many of us it does, it matters a lot – it matters to have our stories told by ourselves.


When we discussed this issue last night, I was left sputtering.  I will admit that I am not intimately familiar with the M/M genre and the ongoing drama llamas, but I do know appropriation when I see it.  During a lot of conversations about appropriation when a person belongs to a specific marginalized group  they justify the act of appropriation by privileging their  oppression.  There is no doubt that women must negotiate sexism on a daily basis however, straight women have no idea what it is like to negotiate homophobia.  These women have chosen to actively do this because they make a financial gain.

People appropriate for three basic reasons:
Appropriation should never be seen as a compliment, because it does not come from a positive place. Whether it is straight women appropriating from the GLBT community, or the GLBT community appropriating from the Black community, the word privilege is constantly thrown around as a defense. This of course takes some very vigorous twisting of facts.  If you are White and GLBT you still have racial privilege, and if you are a woman and heterosexual, you still have het privilege.  The only privilege being ignored is that of the person doing the appropriation.  You cannot take from an experience that is not your yours for profit or social gain.

There are two main things that bother me about appropriation.  The first is that appropriation occurs for some sort of personal gain. A het woman appropriating from the GLBT community because it helps her to sell books, does not want to deal with being attacked for holding her partners hand in public, nor does she want to give up her right to marry the person she loves.  She does not want to be the subject of corrective rape, or have homophobic slurs thrown at her.  The fear of being beaten for being coded as gay is something that she does not want to have to worry about either.  A straight person appropriating from the GLBT community only wants to hold onto the positive aspects of that identity.

Similarly, a White person appropriating from the Black community does not want to be subjected to racism.  There have been many studies that have shown that even with a significant bump in class the majority of White people would not change their race to Black, if it were possible. They don't want to have to worry that their kid will be purposefully under educated, or about giving them a lecture on how to respond to the po po, because the wrong action could mean death.  They don't want to worry about being over represented in the prison industrial complex, or feel the sting of being followed through stores, or thought of as a thief, as people cross the street to avoid them.  Instead, they want to quote pre 1963 Dr. King to us, fetishize us and prove that they have been wronged by taking our struggles and re-wrapping them as their own.

No privileged person wants the negative that comes with any marginalization and that is exactly how we know that they are not acting in good faith when they appropriate from us.

The other thing that really bothers me about appropriation, is that it actively increases oppression. It says that what I am going through, is worse than what you are going through, because it privileges one identity over another. It further reinforces the idea that marginalized people exist to be exploited at will by those who have privilege over them.

I don't care which group is appropriating or what excuse that they use, it is insulting because it strips us of our identity and our history.  If you are appropriating, you are a thief. The act of appropriation reduces the connection between marginalized groups, thereby discouraging others from seeking to ally with people outside of their specific marginalization. When you take from an oppression that is not yours no one wins.
Posted by Renee at Monday, November 07, 2011