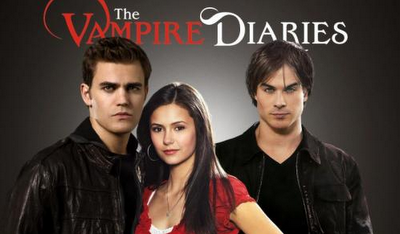 This was an extremely action packed episode and finally, we have some movement on the plot.  The day has arrived for the big homecoming dance and the most excited is of course Rebekah.  I have yet to figure out why the hell a 1000 year old vampire is so keyed up about this event.  Rebekah did mention that she didn't have time for highschool before, because she and Klaus were always moving around but I still fail to see why she sees that as lacking considering that during her human life, there was no such thing as high school.
Cue the big convoluted plan to kill Klaus, with a side of teen angst for extra flavor. Elena stabs Michael so that Stefan can tell Klaus truthfully that he saw Elena stab him, thus luring him back to Mystic Falls.  When he asks for confirmation Rebekah concurs.  For his part Michael holds onto the weapon from the ash tree to ensure that Damon stake out of his heart.
When Michael awakes alone in a room with Rebekah, she tells him to impulses that he is feeling.  He tries to tell her that he was not hunting her, only Klaus because he killed their mother but Rebekah still blames him.  It seems that she holds him responsible for making Klaus a murderer and for turning the family into vampires.
When the crew arrives at the gym, it turns out that it has been flooded and so Tyler moves the party to his house.  When they arrive, Klaus is with the band.  It seems that he does not entirely trust that his father is really dead and so he brings with a few hybrids to ensure that he is protected.  When he tells Tyler that Elena's plans won't succeed, he injects Caroline with vervain and asks Matt to make sure that she gets home safely.
When Michael shows up at the door, he taunts Klaus to draw him out of the house.  When that does not work, Michael grabs Elena and threatens to kill her, which would mean would be unable to make anymore hybrid, Michael tells him that he will be all alone and only surrounded by people that he has compelled for the rest of his existence.  Elena begs Klaus to take Michael seriously, but Klaus calls his bluff and tells Micheal to kill her believing that he won't because Elena is all of the leverage that he has.  Michael stabs a knife through Elena's back and in the shock that occurs, Damon sneaks up on Klaus with the dagger and attempts to stab him and is thwarted by Stefan.  In the confusion, Klaus grabs the dagger and stabs Michael who promptly bursts into flames.