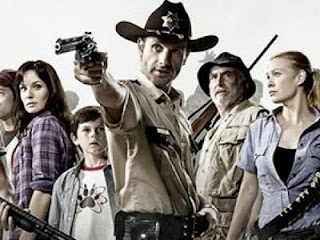 The episode opens with Carl up and about, and Lori feeding the chickens.  A young woman breaks the legs of a chicken, and heads to the barn to feed the  dead. They immediately pounce on the chickens, when she drops them from a ledge at the top of the barn.

As Glenn looks through binoculars, Maggie approaches him with a bucket of sundries and he accuses her of trying to bribe him.  He asks her why Hershel has a barn full of walkers and Maggie demands that he keep that information to himself.

Alone in his tent, Andrea gives a book to Darryl and asks him to forgive her.  He tells her that she was trying to protect the group and that he is fine with it.  I think this was just one more scene in the reformation of Darryl. Gee look how good he is, he forgave Andrea for shooting him.

Glenn approaches Lorri and asks if she told Rick that she was pregnant. He offers his food and she says that she does not want it.  He then tells her that she has a medical condition, and offers to go back into town to get her anything she needs, but Lori tells him that he needs to be quiet about this. I thought that this was more of Glenn's paternalism.  It really is not his place to tell her what she needs to do about this.

Carl is finally looking like the Carl of the comic books. He asks Shane to teach him how to shoot and Shane tells him that it's up to his parents.  As Carl is walking away, Shane realizes that he has a gun tucked into the waist of his pants already. Lori is livid and she learns that Carl lied to Dale to get access to the gun.  She does not want Carl to have a gun, but Rick clearly thinks that she is being over protective. Lori angrily says that he is not mature enough to handle a gun but  Carl interjects and that that he wants to look for Sophia, and that he wants to protect their camp. He knows that he cannot accomplish either goal unless he is armed and knows how to use the gun properly.  Lori tells him that he has to take it seriously and that he must act responsibly and then acquiesces to Carl's request. I can understand Lori's concern but times have changed and Carl having a gun might be the one thing that saves his life one day.
Read More
Posted by Renee at Monday, November 21, 2011