Will Chris Brown Ever Getting Tired of Playing Victim? 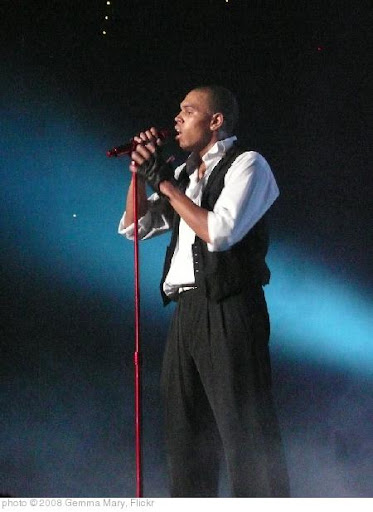 Chris Brown Mr. Newage Ike Turner, has been whining about how the public views him since the moment it was released that he decided to beat RiRi in a fit of rage over a few text messages on his phone. Since then he has publicly and at least one time violently, lost his shit at any mention of this incident.

You would think by now that his publicist would have told him that spending time on twitter, allowing people to see the your new age Ike Turner beliefs is not good for your career.  According to Clutch magazine, Brown has once again taken offense for the suggestion that he is a woman beater via Twitter.


“Don’t say sh– to anybody and everyone feels its cool to attack me. GROWN ADULTS!!!! That sh– happened three years ago. TWITTER GETS WACK REAL FAST! I LOVE ALL THE POEPLE WHO SUPPORT MY MUSIC! i never said i was a LEGEND. people please grow up. Ive never dealt with so much negativity in my life! its to the point now that its just ridiculous! IM NOT A POLITICIAN! MY MUSIC DOESNT PROMOTE VIOLENCE nor will it ever! only thing it will increase is the pregnacy rate! I wake up thinking of living my life….. YOU wake up thinking of me! NOW I REALLY CANT WAIT FOR THE AMA’s! u dont have to respect me now… but u will.

Chris added: “I know a lot of you wack ass (OLD) celebrities probably wanna f— my ex, but talking sh-t on me wont get you far! and to be REALLY HONEST, ya’ll wonder why ni— spazzes all the time?”

Brown quickly deleted the series of tweets, and at the time of this posting, his twitter feed says he has made 9 tweets.  It looks like his publicist is only good at acting after, Brown Mr New Age Ike Turner had already put his foot in his mouth.

It is one thing to give someone a second chance when they have made every effort to apologize, grow and learn, but Brown Mr New Age Ike Turner, has made no effort to convince us that he has temper under control or that he understands the severity of his actions. If simply mentioning what he did to RiRi puts him in a rage, what guarantee do we have that he does not see beating on women as an appropriate response to any kind of anger that he may feel?

Chris Brown, Mr New Age Ike Turner, should have to live with the consequences every damn day of his life because RiRi will have to.  Why should he have an easier fate than the person whom he violated?  If he didn't want to be called a woman beater, then he never should have laid hands on RiRi.

I think what disgusts me the most about this man is his constant attempt to make himself appear to be the victim.  He was not the one who was beaten, and he was not the one whose body was covered in bruises.  The idea that we should pity him is ridiculous.  He is in the situation that he is in because of his actions alone.

If that were not enough, he then implies that those attempting to hold him accountable for his actions are not behaving in an adult manner.  He positions himself like a helpless child who is unable to defend himself, when all he has done is defend his heinous actions.

I would love nothing more than for Brown Mr. New Age Ike Turner to disappear from public discourse permanently. I think he needs to go for counseling and deal with his issues before he hurts another person. He is a ticking time bomb just waiting to explode and that is something we all need to be wary of.
Posted by Renee at Tuesday, November 22, 2011