The Commodification of Blue Ivy Carter 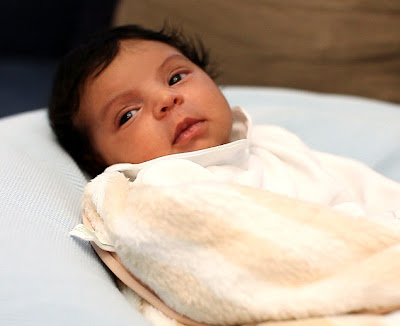 Coming into the world as the first child of Jay-Z and Beyoncé, means that the unlike many little Black girls across the world, Blue Ivy Carter, was immediately understood to have value.  Of course by value, I don't necessarily mean any real respect for her person, but rather value in terms of her potential to make people a lot of money.  There has been a long history of claiming, constructing, and debasing Black women, and despite her privilege, Blue Ivy Carter, will not escape this.


On Jan. 26, new parents Beyoncé and Jay-Z filed an application with the U.S. Patent and Trademark Office to protect the baby’s name — and reserve it for a future line of baby carriages, baby cosmetics, diaper bags and other undoubtedly fabulous accoutrements for the fashion-forward infant.

In the superstar industrial complex, trademarking your baby’s name is just smart business. There all sorts of folks who might try to slap it on some tacky baby bib.

To wit: Fashion designer Joseph Mbeh, who submitted an application to trademark “Blue Ivy Carter NYC” on Jan. 11 — just four days after the baby was born. Another applicant filed on Jan. 20 for “Blue Ivy Carter Glory IV” to use on a line of fragrances. The trademark office has already denied both filings, saying the name belonged to a “very famous infant ” and consumers would falsely assume that the products were approved by the celebrity parents.

Mbeh, who intended to produce children’s dresses, skirts, and underwear using the name, issued a groveling statement after his Jan. 25 smackdown from the feds. A big misunderstanding!: He planned to pitch the idea to Beyoncé and Jay-Z and never, ever, intended to poach any of their baby bucks.

The application by BGK Trademark Holdings — Beyoncé’s company — is pending but is basically a done deal because parents are legally authorized to trademark the names of their minor children, experts say.

I completely understand the desire to protect one's child from predators. Black children are often seen as surplus population, and in many cases are specifically directed on an educational path that does not lead to college or university.  They only become interesting or deemed valuable when a profit can be made from them.  Shortly after Barack became president, Sasha and Malia dolls were created by Ty Dolls, causing Michelle Obama to complain that this was unacceptable, even as the company denied that there was a connection. They in fact had the nerve to suggest that they simply liked the names. Uh huh.  Considering what happened to Sasha and Malia, it is understandable that Jay-Z and Beyoncé would want to stop someone from getting business cards printed, throwing up a shingle and shelling some cheaply made products with their child's name.


It is up to Beyoncé and Jay-Z to protect Blue from exploitation, but somehow I believe that they will use their power as her parents and legal guardians to participate in a little exploitation themselves. Blue is not old enough to speak for herself, or to act in her best interests, and this makes her vulnerable.  It is this very vulnerability that causes many to rule out consent where children are concerned.  If the power couple does not make a baby line of products, they certainly stand to lose some money, but given their already massive class privilege, this is money that they most certainly will not miss.  Many kids who enter showbiz end up being the main financial support for their families, and this means their ability to choose whether or not to sing, dance, or act is severely limited. Though Blue's parents are rich on their own right and not dependent on any income she would bring, if a line with her name does result in a substantial profit would they be willing to bring it to an end should their daughter ask one day?

At first the requirements for Blue will be incredibly small, but if the brand becomes successful, then Blue will be placed into a position to have to represent the brand and this will indeed require work.  The worst part about all of this is that none of it will be her choice.  She will be commodified like any other product - not a person but something to profit from.  I am quite sure that this is not the intent of her parents, however, it will be the end result.

What does it mean when a Black child is stripped of the little identity that she is allowed to have as a person and turned into a product that is for sale? I am sure that there are those that would see this as a positive, because wealth will lead to opportunities that are most certainly not universal, however; if the creation of that wealth is based upon one's physical body without actively being consulted in the decision, regardless of the opportunities it provides it is still reductive and sends the message that one's only value based on the money that may be earned.

As a parent, consent is something that is extremely important to me.  It gives children a strong sense of self to have control over their world, their bodies and their environment. My youngest son is extremely adapt at saying the word no, as Sparky can attest to.  No matter the frustration that this causes, I know that it is important for him to understand that he has the right to say no, and to have his no respected.  I believe that this is an important lesson that will translate later when we start talking about affirmative consent.

If Blue does indeed become commodity, even with her parents handling her image, it will become just one more thing binding her and defining her.  There is a long history of celebrity children going off the rails with drugs and criminal activity.  If Blue becomes a commodity, not only will she have to walk in the ever so large footprints of her mother and her father, she will become an item to be possessed by all. Black girls already have a heavy burden to carry in this life, and I worry that despite all of the trappings of wealth, that Blue's burden may be exceptionally heavy.
Posted by Renee at Wednesday, February 15, 2012