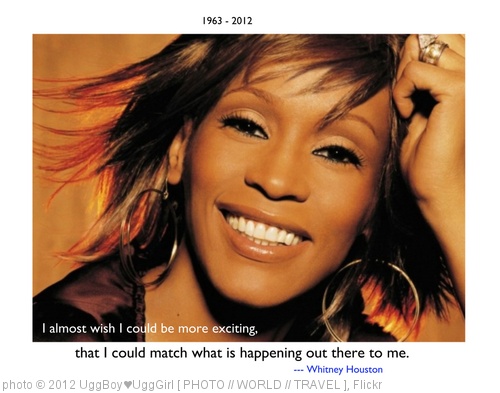 I understand the need to have positive representations of your identity. This is particularly the case for the LGBT community, whose history has been hidden, and in many cases erased. I do however take issue with outing someone days after they have died, before they have even been buried.


Human rights campaigner Peter Tatchell has expressed his sadness at the death of Whitney Houston – and claimed that she was happiest during a lesbian relationship.

The comments came the following day after Houston, 48, was found dead in a Los Angeles hotel.

“Whitney Houston RIP. She was happiest and at her peak in the 1980s, when she was with her female partner. They were so loved up and joyful together,” Tatchell wrote on social networking site Facebook.

“It’s important to tell the truth about this aspect of her life. Colluding with the cover-up of her same-sex relationship is not right."

He is referring to Houston's rumour-sparking friendship with Robyn Crawford, whom she described as the "sister she never had".

Their relationship was dogged with lesbian rumours, which they always denied. [source and emphasis mine]

Look, there have long been rumors that Whitney may have engaged in a same sex relationship however, when asked about it, she publicly denied it.  Deciding to assert her sexuality after her death is absolutely without class and shows zero respect for her agency.  I am not saying that there is anything wrong with being gay, but I am saying that it is wrong to publicly out someone within days after death, with the full knowledge that the person in question publicly denied being in a same sex relationship.  Exactly how does this show any kind of respect for her person?


If Whitney was still with us today, there is no way in hell Tachell would have dared to publish that article, because of the potential that he would have sued into oblivion, and this is specifically why he waited to make these assertions.  It is cowardly to wait until a person is dead and gone and can no longer control their legacy, to make any attempt to assert something as truth, that they have repeatedly denied. The bottom line is if Whitney had wanted the world to know that she was bisexual, then she would have said so.  The fact that she did not means that she either chose to lead a closeted life, which btw is her damn right, or the rumors themselves are untrue. Either way, it is not up to Tachell to decide that he has the right to openly speculate on her sexuality.

So interested is Tachell in declaring Whitney a member of the GLBT community, he has forgotten that not only is he outing her, but her best friend from childhood Robyn Crawford.  So close were the two, that Robyn was the maid of honor at Whitney's wedding, which resulted in a failed marriage to the new age Ike Turner Bobby Brown. Whitney is dead and gone, but Robyn is still with us, and it is she who will have to live with Tachell's public revelations.  I could possibly understand outing her if she were openly homophobic, or fighting to block BLTG rights, but as far as I know -- she has done no such thing.  Why is her right to privacy not being respected?  Homophobia is a terrible terrible assault on ones person, and a complete denial of human rights, and this is why it is imperative to allow each person to negotiate it as they choose, unless they are actively harming the community. By writing that piece, Tachell a White gay man took the choice away from a woman.  Yeah, I see some sexism there.

I further submit to you that had Whitney not been a celebrity, that Tachell would not have been interested in whether or not she was leading a closeted life.  Being a celebrity does not mean that you have given up your right to have any kind of private life.  As much as millions loved her gorgeous voice, the only person Whitney belonged to was herself. Regardless of what Tachell's intent was, he had absolutely no right to make a declaration on Whitney's behalf.  She may well have been bisexual for all I know, but I am absolutely certain that if she had wanted the world to know this about her, she had 48 years to make it public.

For heaven's sake, just let Whitney rest in peace.  Though she had fame and class privilege, her life was not easy.  Now that she has passed on, I think she is entitled to have her words and her actions speak for themselves, without them being filtered through someone else's idea of who she was.
Posted by Renee at Wednesday, February 15, 2012