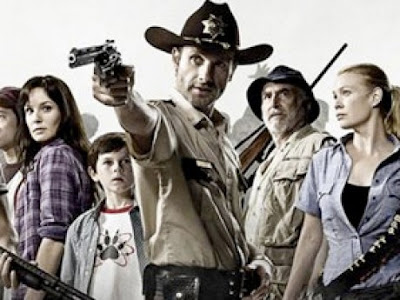 This episode begins right where we left off, with Rick shooting Sophia and everyone standing and crying. As Hershel and his family head back to the house, Shane who is not dead, loses his top and starts screaming that they knew all along.  When he moves to get into Hershel's face, Maggie slaps Shane. This had me cheering because it's about time Shane got put into his place. I am sick and tired of him bullying people at will.  Of course, Shane who is not dead, is not content and accuses Rick of not handling the situation, because he believes that Rick had them out in the woods looking for a little girl that was dead all along.

As Andrea covers Sophia's body, Darryl approaches Carol in the RV.  In the house Glenn questions Maggie about Sophia being in the barn.  He tells her that this is for the best, and now they can move on. When Maggie asks what happens now, Glenn simply says that they will bury Sophia. It's so clear that what Maggie really wants to know is what Glenn's intentions are.  Outside they agree to bury the bodies of the ones they love and burn the rest. This is further proof of their detachment from the walkers.  At this point they are just monsters with no remnants of humanity attacked to them.

Laurie pulls Rick aside to offer words of  support.  She assures him that he did everything that he could. Considering Lori's history, this is obviously going to be temporary and in fact, I crack it up to shock at finding out that Sophia was in the barn all along.  Rick says that he is broken, because he believes that people are counting on him, but he had them chasing a ghost in a forest. Honestly, he was damned if he did and damned if he didn't.  Until some sort of resolution was found for Sophia, she always would have been an issue in the group. There would have been those who would never have forgiven him, had he halted the search for her.

When Shane goes to get the truck to move the bodies, Dale is staring at him.  Shane reminds Dale that he had the chance to shoot him and that he didn't.  He also makes a point of saying that he does not believe that Dale is doing enough to keep everyone safe. Things are clearly coming to a head between these two, but I don't see how far they can go, considering Dale has already made it clear that he will not shoot Shane. I think that if Dale continues making his hatred obvious, it will put a target on his back.  With the death of Otis, Shane has proven that he will always put his well being first.

With the exception of Carol, they all gather for the burial.  Carol feels that Sophia died a long time ago, and that she didn't go hungry, she didn't try to find her way back to them, and she didn't cry herself to sleep at night. Carol's pain in this scene was absolutely heartbreaking, and as a mother I found myself feeling her pain.  A parent is not supposed to outlive a child.