Born With A Burden: Are Black, Disabled Children Being Mistreated?

I have a new piece up at Clutch 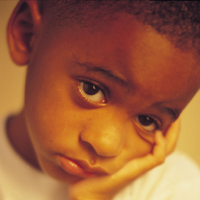 Every Black child is born with a burden.  From the moment of their first breathe, they are marked as second class citizens, because we live in a White supremacist world.  If said child happens to face another marginalization like disability, for instance, this burden expands, because they must deal with the twin evils of ableism and racism. The more marginalizations one has to negotiate, the harder life will be.


Andre McCollins was 18 years old on October 25th, 2002. This autistic young man was on his way to school, when a physical altercation occurred on the school bus, which led to him being shocked and restrained. When he later refused to remove his coat as instructed, he was forcibly strapped down to a bed face down, and subjected to 31 instances of electric shock at the Judge Rotenberg Center.  This torture went on for over seven hours, as McCollins cried, begged and pleaded for help.  The video is extremely disturbing.

Electric shock treatment was apparently used as aversion therapy in McCollins case, and was a part of his court-approved treatment plan.  The Christian Report claims that literature from the Judge Rotenberg Center says  electric shock “feels like a hard pinch, [have] been extensively validated in the scientific literature… [are] extremely effective, and [have] no significant adverse side effects.” Clearly, what was recorded in the video is a far cry from a mild corrective measure.  The treatment of disabled children is allegedly so extreme at the Judge Rotenberg Center that Mental Disability Rights International  made an urgent appeal to the United Nations Special Rapporteur on Torture in 2010.

The next day, Andre was catatonic.  Dr. Marc Whaley, who testified in court last week, on McColins behalf stated,  “Now we have an individual who’s heavily medicated, state institutionalized with no immediate prospect of any kind of independent functioning. And all of that turned on October 25, 2002 when his psychotic disorder was traumatized by the 31 or so shocks he got on that day.”