Jon Hamm Does Blackface on '30 Rock'

Last Thursday, 30 Rock did their second live show.  It featured many stars, but what it will probably be most remembered for, was a scene in which Jon Hamm donned Blackface to make a statement, about the racist actions of media in the past. 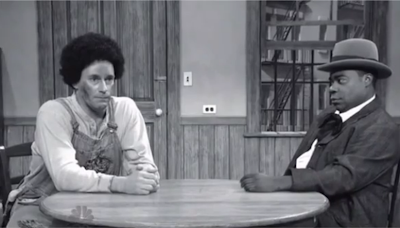 As you can see from the above image, Hamm's makeup did not cover his entire face, and so clearly it was meant to be satire. The problem is that Blackface in the media is not a thing of the past, as this skit suggests.  At this year's Oscars, Billy Crystal donned Blackface to impersonate Sammy Davis Jr. Comedian Dave Ackerman chose to dress in Blackface to ask BYU students about racism and black history month.  Somehow, he missed the point that one should not engage in racism, while trying to make a point about racism. America's Next Top Model and French Vogue have also had blackface incidents. Claudia Schiffer posed in Blackface for Karl Lagerfeld, but don't get upset folks, they were only trying to be "edgy" not offensive.


Blackface is not simply something that is part of American history, it is an ongoing phenomenon - no matter how many times African-Americans state how unequivocally offensive this is.  This skit attempts to place Blackface in the past -- and by so doing -- ignores the people who continue to be harmed by it.  We are not post racial and we are most certainly not post Blackface. This is also Hamm's second racially problematic skit. Yes, I'm counting.

I know that Tracy Morgan had a hand in this skit, but lets face facts, Tina Fey is the true power behind 30 Rock, and this is why it smacks of a failure to admit that this particular manifestation of racism is not a thing of the past.   If we are ever to have any hope of a reduction in racism, let alone an end to it altogether, we need White people to have critical conversations about racism.  Taking a detached approach is what White liberals tend to do, because it allows them to claim cookies and be presented as good progressive people. It's ridiculous. It's like attempting to put a band aid on someone who has had their carotid artery slit.

I am not offended by the skit, because I know the attempt was to interrogate Blackface, but I am not about to hand out any cookies because of the limitations of the skit itself. If the 30 Rock, or for that matter White liberals want to impress me, they can just stop dancing around the issue and tackle what is happening today head on.
Posted by Renee at Monday, April 30, 2012