This cake has to be seen to believed. 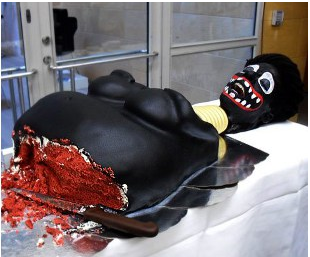 As part of the installation, which was reportedly meant to highlight the issue of female circumcision, the culture minister began cutting a large cake shaped like a black woman, symbolically starting at the clitoris.

Makode Aj Linde, the artist who created the installation and whose head is part of the cake cut by the minister, wrote about the "genital mutilation cake" on his Facebook page.

"Before cutting me up she whispered, 'Your life will be better after this' in my ear," he wrote in a caption next to the partially eaten cake. [source please read the entire article]

Few things leave me speechless but this cake did.  There is no doubt in my mind that this cake, regardless of the motivation behind its creations is both virulently anti-woman and racist.  To watch them laugh and consume this cake is to see an act of violence.


The minister actually cut the cake at the site of what would have been a woman's clitoris as a supposed attack on female genital mutilation.   Cutting a disembodied woman, who is a racist caricature does not send this message.  With allies like this, who needs enemies? Cutting into a woman's body even symbolically is violent. To watch as these White women laughed and consumed cake, supposedly out of concern for a problem that does not happen to them, belittles the struggle to end the horror of FGM. The fact that the cake is a red velvet cake underscores the violence as the red symbolizes blood. Hasn't enough Black blood been spilled in the name of White supremacy and patriarchy?

There is also the black face to consider.  There is never a situation in which this will ever be acceptable. The idea that because art is meant to challenge the consumer does not give one license to behave in a racist and sexist manner.  This supposed art does not challenge any preconceived notions and only affirms White supremacy and patriarchy. It dehumanizes instead of uplifting.

I felt pain looking at that cake.  It leaves me speechless and unable to articulate the hurt.  That this was done by a supposed liberal group of White women comes as no surprise, because there is a long history of White people claiming to be concerned with the plight of people of colour, even as they work to support and strength White supremacy. These women may well have felt that because their intent was good that no harm was done, but they are wrong.  Intent is not a magical elixir and much harm has been done in the name of good intentions.

There isn't much more that I can say about this supposed art, and so I am going to turn it over to you.  How does this cake make you feel? What is your take on the artistic merit of the cake? Do you believe that these women got the message across that they were intending to send?
Posted by Renee at Tuesday, April 17, 2012