Restaurant Makeover and the Colonization of Cultures of Colour 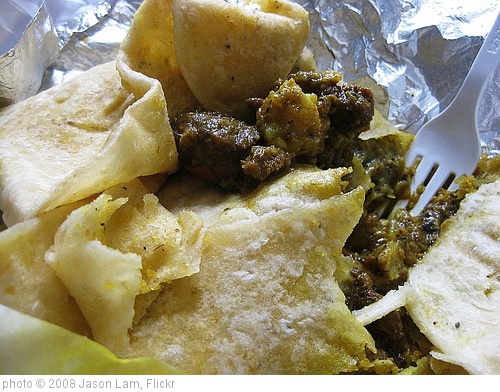 For much of the day my television is on the Food Network.  Every morning at 9AM Food Network Canada airs Restaurant Makeover.  As the title suggests, the Food Network team attempts to help failing restaurants by pairing the owners with a top notch designer and a celebrity chef.  The owners typically pay fifteen thousand dollars, with Restaurant Makeover matching them dollar for dollar to achieve a brand new look and a new menu.

The last two mornings, The Food Network has aired episodes in which Restaurant Makeover has tackled West Indian restaurants.  The two chefs involved were Brad Long and Corbin Tomaszeski.  These men have extensive credentials, but neither of the two have had any experience with West Indian food. Both openly commented that they would have to do research before attempting to help the chefs at the restaurants they were trying to makeover. This was complicated by the fact that in Tomaszeski's episode, the owners were asked repeatedly what would happen if Restaurant Makeover rejected their desire to appear on the show.  It came across like begging for White intervention because they were incapable of cooking the food that originated in their culture, though they had been in business for over 15 years, doing special events.


At the beginning of every kitchen segment, the restaurant chef cooks a few meals for the celebrity chef.  In Long's episode, the restaurant chef presented him with roti, which he had never eaten before. Long didn't even know what a roti shell was made from.  It seems to me that having experience with island food and roti in particular, would be necessary to revamp a roti restaurant.  Long is famous for his use of fresh local ingredients in his food, but no island food is local to Toronto.  He had no business acting as expert in this situation.


Tomaszeski did better in his episode, but his unfamiliarity with island food did lead to several faux pas.  If one has eaten okra before, one knows that they are slimy.  I am not a fan of okra because of the slime, but to blame the slim on the chef in question speaks of Tomaszeski's ignorance and not a failing on the part of the local chef.  A staple of West Indian cuisine is something we like to call provisions.  It includes things like fried dumplings, ackee, and salt fish.  Being surrounded by water, fish is quite understandably a major staple of the island diet.  I grew up eating salt fish stewed in tomato paste with thyme, onions and garlic.  This is pretty standard fare, but Tomaszeski was troubled by the idea of fish being a part of breakfast food, and in fact suggested that it had no place on the breakfast menu.  On the bottom part of the restaurants menu, there was a section for Asian inspired West Indian food, which Tomaszeski dismissed and in fact crossed off the menu.  What Tomaszeski does not realize is that especially in Jamaica, there is a strong fusion between certain Asian dishes and typical West Indian fare because of Chinese Jamaicans.  What seemed odd to him, is perfectly natural to others. Tomaszeski didn't even understand the significance of the iron pot.

These two episodes reeked of Whiteness as expert.  Tomaszeski and Long had absolutely no experience with the food they were trying to cook, yet they were deemed the experts and more proficient than those who grew up cooking and eating this food on a daily basis.  Whiteness as expert on cultures of colour is not something unique to the Food Network, it's just something that they do on a regular basis without much resistance.  Every single chef on the roster of Restaurant Makeover is White, and all but one designers is White, yet they continually insist on remaking restaurants in communities of colour.  Through food and design, Restaurant Makeover is continually engaging in the colonizing of cultures of colour, and their revamp presents us with their vision of what represents our cultures and what is valuable to us. It suggests that that which is unique to us, is not valuable if it deviates from what Whiteness expects or has normalized for us.

To watch these episodes, is to see colonialism in action, and when we consider the violence and erasure that comes with colonialism, it makes me wonder how those who participate, can believe that they are actually helping rather than harming. The fact that Restaurant Makeover is aired across Canada, means that colonialism in this case becomes entertainment for the masses, thus effecting far more than the neighbourhoods in which these restaurants are situated. The paternalism engaged in by the White chefs serves to not only 'other' the chefs of colour, but to infantalise them. The Food Network could absolutely hire chefs of colour if they chose to do so; I do not believe that the homogeneity of the staff is an accident.  This is simply about presenting Whiteness as benign, while marking cultures of colour as desperately in need of White leadership to succeed.
Posted by Renee at Wednesday, April 25, 2012