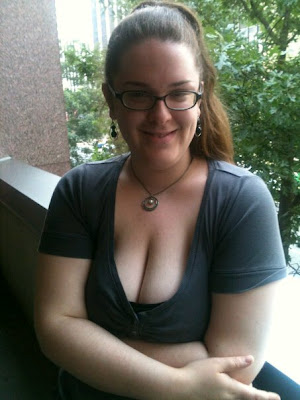 Allison McCarthy is a freelance writer whose work has appeared in publications such as Bitch, Ms. (blog), AlterNet, Girlistic, Global Comment, ColorsNW, The Baltimore Review, Ariel Gore's Literary Kitchen, and Hoax, as well as in the anthologies Robot Hearts: Twisted and True Tales of Seeking Love in the Digital Age (Pinchback Press) and Dear Sister: Letters to Survivors of Sexual Violence (forthcoming).  Her guest column for GOOD magazine was selected as an Editor's Favorite for 2011.  She is currently a graduate student in the Master of Professional Writing program at Chatham University and lives in Maryland.

Last month, I published a guest piece at Womanist Musings, “In Memory of Shaima Alawadi.” The poem was reprinted from my Tumblr account with my full permission.  Per Renee’s directive, I also included a photo and a brief biography of my most recent writing credits.  Given the content and the anti-Muslim, anti-women of color sentiments that pervade the blogosphere, I expected some pushback to the piece. But what happened next went beyond the limits of my feminist imagination and into the realm of Troll-dom.

My poem was based on a video interview with Fatima Alawadi, Shaima’s daughter, who found her mother’s body and sobbed throughout the local news story, calling her mother’s killers “animals without a God.” As a writer and sometimes-poet, I responded to the story via poetry, trying to capture the horror and sadness of a hate crime and the grief of her surviving daughter.  As a white feminist, it troubles me that issues which impact the lives of women of color are often silenced in online communities.  My writing was an attempt to counteract that silence.

Since the interview and the poem’s subsequent publication, there have been questions about the killer’s identity.  My writing was based on the video and activist links from the Facebook group One Million Hijabs for Shaima Alawadi.   I encourage thoughtful discussion and debate; it is what shapes our arguments and makes us more accountable community members.  You don’t have to think I’m a stellar poet (I’m not) or think every word I spout is Gospel (it isn’t) in order to critique my work.

But what I cannot encourage is the outright theft of my image and work –  in fact, such actions are in violation of Blogspot and Google’s Fair Use & Copyright agreements.  After my poem and byline went live, the work was stolen by the blogs BlazingCatFur and AnsweringMuslims.  Renee reported BlazingCatFur to Google and the image was removed, replaced by a large pair of breasts (lovingly decontextualized without a face – because sexism lives on even when Google shuts your sorry ass down and tells you to play nice with the other bloggers!), and the text of my poem links back to Womanist Musings.  At this moment, AnsweringMuslims still has the text of my poem reprinted without my permission or a link back to Womanist Musings.  Pretty brazen violation of copyright, no?

Against my friend’s advice, I waded through the commentary at both blogs, determined to gauge people’s responses.  Keep in mind: the sites I’ve written for thus far are social-justice minded.  Sure, there’s been disagreement, but I’ve never been subjected to anything as personal, vicious, or gut-wrenchingly sexist as the commentary I share with you now.

What do you get when you put Allison McCarthy, Samantha Brick, and Meghan McCain in a hot bath tub with parsley.......
.....cunt soup.


I'm quite the poet myself actually.  My specialty is haikus.  Is anyone familiar with a haiku?  Well....this one's for Allison McCarthy.

Your cleavage is like a ski slope.
You must need a push-up bra.
And if you think you're a poet,
All I can say is ha!


Wow. Her cleavage was massive. (Was her fondness for displaying it one of the reasons behind the honour crime?)


Nice jugs - they somewhat compensate for her utter stupidity.

So violence against women of non-color is OK?

Your IQ is about the same as your bra size. Which you seem to think adds something to your rant.

Shaima al walaloody was killed by her family because she brought shame to them.

You know what they do in those middle eastern countries, they cut their clits.  You know what a clit is, right?......dummy.


Hey, your puke-worthy drivel can reach many more people if it's quoted here. The Cat's little blog has a much higher traffic than your queer site.

By the way, "womanist musings" is a sexist and patriarchal name. If you were real feminist worth her salt, you should've spelled it "womonist", "womynist",  or "wimminist".

And exposing your breasts in such a tit-illating way is not going to win you many friends among the Muslim barbarians whom you support.


Five needs to PM her and tell her the specification for proper bras in future, nudge her  towards her actual size not six sizes to small.

Didn't the market for crappy free verse die out with the beatniks?

Well she has quite a set of Bongo's!

There once was a graduate student
Who wrote "poems", but did not think it prudent
To read up on a case
Before she blamed it on race
Thank goodness her boobs are protrudent.


And of course in true femi-nazi fashion she has to have her boobs hanging out for all to see.


Obviously there are much greater issues here, but as a woman I can't help but wonder, why on earth this "poet" did not immediately shred that horrendous picture of herself let alone use it as her byline pic? That right there shows her judgment abilities.. or lack there of.


An aesthetic observation: This picture may warrant a PG13 warning due to the full-fledged display of cleavage.

And that’s just a lovely taste of the sexism I faced for publishing this piece.  Notice the running themes – the size and shape of my breasts, how my gender is inherently linked with my inability to write, body shaming.  Well, here’s my response.

Fuck the bandwidth that printed your sorry-ass commentary.  Fuck you for belittling the lives of women of color.  Fuck your Islam-hating ignorance.  Fuck your scorn for the most lovely pair of breasts I have ever been privileged to own (granted, they’re the pair I was born with, but I digress).  They are mine.  This body is mine.  It is a body that produces the work of my life.

P.S.  If you want to hear a hilarious and catchy take-down of the sexist commentary BlagHag has been subjected to, check out Three Ninjas feat. Jen McCreight – Airbrush Your Balls.
Posted by Renee at Monday, April 30, 2012