Sports Fanaticism Does Not Justify Racism

Last night, the Washington Capitols played the Boston Bruins in game 7 of the first round of the Stanley Cup playoffs.  Washington Capitals Winger Joel Ward scored the game winning goal in overtime, becoming the first Black man in NHL history to score a game 7 winning overtime goal in the playoffs.  Check out his moves.

Any hockey fan can tell you that tensions run high during the playoffs because hockey fans are incredibly invested in the team that they support.  The fact that this round came down to game 7 and overtime at that, most certainly increased the angst and the pressure to win.  Unfortunately, some Boston fans decided to take their frustration on the loss of their beloved Bruins to twitter, and that is where the racist vitriol ran amok. 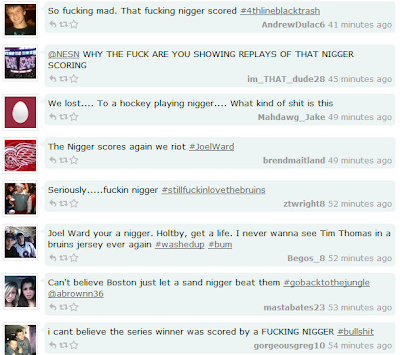 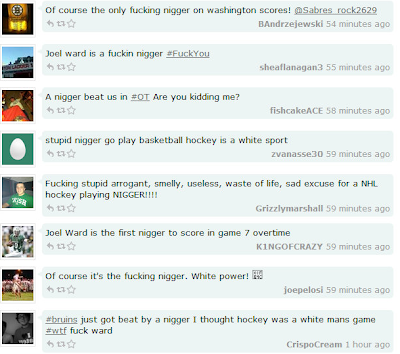 This is not the first time we have seen this kind of outbreak in hockey, let alone sports.  Athletes of color have long experienced this sort of racist vitriol and have persevered in the face of it. It does not occur to these fans in their rage that they are either sitting on their couches, or in a bar somewhere because they are not the athletic equal of the athlete in question.  They continually reach for the great equalizer - racism to express their rage, or to throw an athlete off of their game.

Unlike basketball, hockey is predominantly played by White men on a professional level. Even the sports analysts of hockey are predominately White males.   These comments not only reflect this fact, but the fear of being ousted from a sport that has been claimed by Whiteness.  Hockey remains a bastion of straight White male hyper masculinity.  The fact that Whiteness is institutionalized in the sport, makes it that much easier for fans to respond to a victory spearheaded by a man of colour in a racist fashion.

In the reports that I have read regarding this incident, there has been a rush to claim that these comments are not reflective of Bruins fans, or of hockey fans for that matter.  This approach is clearly an attempt to suggest that these are isolated incidents, rather than a part of the institutionalization of hyper White masculinity throughout the sport, and in the larger social sphere.  This approach is not new, as each racist incident is invariably perceived by Whiteness as isolated due to a desire to escape culpability.  This is why the definition of racism as privilege plus power is essential to understanding how racism truly works.

I was not surprised to read these tweets, but I was sorry that Joel Ward had to experience this on a night that should have been about pure celebration for him. He was violently reminded that no matter what achievements he manages to accrue throughout his career, that to some, he will always and forever be a nigger. People of colour are continually told that we are lucky to live in a post racial world, and that we simply need to work harder.  The attacks against Ward prove that the answer to dismantling White supremacy is not for people of colour to work harder, but for White people to accept that their privilege is undeserved.  The notion that one can simply pull oneself up by the bootstraps and be seen as an equal human being is false -- not only because it puts the onus on people of colour to create the change -- but because as we have seen time and time again that exceptionalism will not result in equality for the individual, let alone the masses.

If we're lucky, we will see some small amount of discussion about this incident, but it will quickly be erased in the fever to race for the cup.  It will be forgotten by the White supremacist institution, leaving only people of colour to remember the violence that occurred.  It is because Whiteness does not have to live with the sting of racism and actively benefits from it, that this incident will quickly be forgotten.  It is  people of colour who will remember, because it is us that has been wounded.  Some will even go as far to suggest that because the impetus for racism was a hockey game that it is unimportant, but each wound that we must live with is simply a reminder that despite the achievements of people of colour that we are not now, or have ever been perceived as equal.
Posted by Renee at Thursday, April 26, 2012