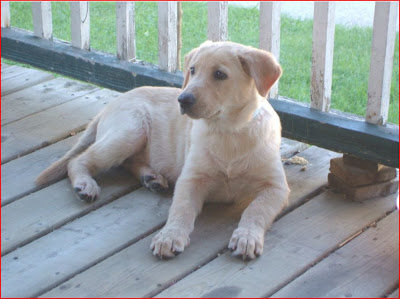 The unhusband and I remain one those couples.  Yes, those couples, who irritate you because they are sickeningly sweet.  We tell each other that we love each other several times a day, we hold hands whenever possible and we hug and kiss a lot.  It's nothing to see us cuddled up together. In all of our years together, I have never worried about another woman coming between us, but a bitch is another matter altogether.

It all started when she looked at him with her big brown eyes and whimpered softly.  He knew my position on dogs in our bed. He knew that because of the size of the dog she would eventually grow into, I was adamant that this dog not even be allowed in our bedroom.  The unhusband was crafty by at first sneaking her into our room.  When he would go for a nap, he would take Ms. Sookie with him, claiming that the bed felt empty and lonely without me in it to keep him warm and comfort him.  I allowed him this indulgence, believing that when I entered our bedroom that she would know her place and relinquish my spot.  That was my mistake, I gave the bitch and inch and she took a mile.

Now when I walk in the room, she has the nerve to growl softly before climbing off the bed and walking around to his side of the bed and whimper about me.  Yes me, as though I am the interloper in their perfect union.  At first she waited until I fell asleep and tried to crawl between us, but quickly discovered that this would wake me and that she would find herself back on the floor where she belongs.  Then she got sneaky and now waits until I fall asleep before climbing onto his side of the bed.   This of course means he has to move over, almost squeezing me out of the bed, but so bewitched has he become by her brown eyes, that he does not have the heart to send her to floor where she belongs.


Not only has she used those big brown eyes to steal a spot on our bed, she uses them to get food she should not be having.  As a big dog, from a breed that is prone to problems, I have tried to assert a dog food only rule, but the minute one of the men is eating, she stands close to them and turns her head just so.  Eventually, one of them gives in and she finds herself supping on one of the delicacies I have so lovingly prepared for the family.  She has talked them out of meatballs, and they have cut chicken off the bone for her.  Mayhem, who is known for his love of beef ribs, will even leave a little meat on the bone before handing it to her.

Having decided that Ms. Sookie has declared war, I prepared for battle, but who could have predicted her next move.  As the unhusband sat on the computer this morning, I walked up to him and wrapped my arms around my man kissing him.  When I first approached him, she was across the room, but seeing that I was getting close to the man that we were battling over, she came running over, pushed me aside and inserted herself between us.  My head snapped back and I do believe I said, "oh know you didn't."  The unhusband being a man lost it laughing.  He of course sees no need to end this war because he has become the subject of our struggle.

When he went upstairs for a nap, she walked triumphantly with him, but made sure to stop halfway up the stairs to look at me.  I do believe she thinks that she has won.  Clearly, this means war. It's bad enough that when the boys get home from school she will run to ensure that she beats me to the door and jump all over them before I can kiss them hello and ask about their day.  I think Ms. Sookie has declared my men hers.  Since she does not have the same standards as I do, like forcing them to lower the toilet seat and not leaving socks on the living room floor, she appears passive and sweet.  She looks at them with a constant state of worship, which no matter how much I love them, they are most certainly not going to get from me.

I feel absolutely betrayed.  I was the one who suggested we get a dog because at the time the unhusband worked nights and I was alone with the kids.  I further made a point of demanding that we get a female dog, strong in the belief that our home needed an influx of estrogen. She should be my natural ally in the war of the sexes.  I thought that because I would be the one to be home with her most often that she would become my dog, but boy did I ever peg this one wrong.  She has her moments when she will cuddle up to me and keep me company, but of course she waits until it's just us.  Then and only then does Sookie seek female solidarity.

I have come to the determination that Sookie for whatever reason has internalized some form of sexism along the way. How she cannot see the benefits of female solidarity in favor of attempting to steal my man, I simply cannot understand. She seems to believe that warming my feet on cold nights is payment for her man stealing ways.  Is this a symptom of her being the only girl in her litter?  I know that I have given her a great example of female headship and still yet she continues to attempt to usurp my position.  I may not have her soft fur, and four legs, but I am up to this challenge.  She may well be the bitch of the family but I am the woman.
Posted by Renee at Friday, April 20, 2012