If the intent is to make people laugh, selling a product using Brownface isn't in the least bit racist right? 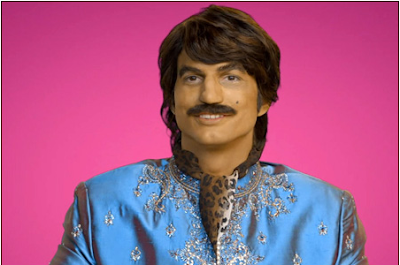 The above image is Ashton Kutcher playing the role of Raj, and Indian character determined to find love.  According to the New York Times, the campaign was developed by Kutcher, PopChips and an advertising agency named Zambesi, and cost an estimated $1.5 million.  I suppose when it comes to Whiteness investing in racism and promoting racist stereotypes, cost is not object. Let's have a look at what all this money bought them.

The moment I saw this commercial, I thought hell no, but apparently PopChips had no clue until they started to receive complaints.  In order to stifle dissent, they released the ever popular faux apology.

The new popchips worldwide dating video and ad campaign featuring four characters was created to provoke a few laughs and was never intended to stereotype or offend anyone. At popchips we embrace all types of shapes, flavors and colors, and appreciate all snackers, no matter their race or ethnicity. We hope people can enjoy this in the spirit it was intended.

See that folks, they weren't attending to be racist, they were embracing diversity.  I guess there simply aren't enough actual Indian people living in the U.S. and this forced the to employ a racist brownface character in order to be inclusive. If that excuse doesn't work for you, try considering that this was meant to be comedy.  Nothing is ever truly offensive if the intent is to make people laugh. Isn't that what comedians have been telling us for years?

At this time, Kutcher has yet to comment on the outrage over this commercial, which leads me to believe, he doesn't think that what he did was wrong, or sees it as no big deal.  These things just blow right over, because they aren't actively attacking Whiteness, which is the racial group that counts.  It's just another day of White people being racist and Brown people being oversensitive.  Gotta love this new post racial world.
Posted by Renee at Thursday, May 03, 2012