Leah Dunham and her all White "Girls" 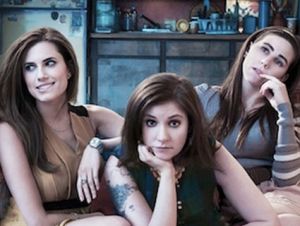 When Girls premiered, it was touted as Sex in the City for a new generation.  I decided to give it a go and found that it was nothing but a navel gazing show, focused on the angst of a group of White women.  There is nothing original about this.  Turn on just about every television show in the mainstream, what you will undoubtedly find is that Whiteness is the focal point.  Girls did throw us a bone and include a Black homeless man in the last 30 seconds of the premier.  Yeah for inclusion everyone.

I am not the only to come to this determination.  Lena Dunham recently addressed the lack of inclusion on the NPR:


“I take that criticism very seriously. … This show isn’t supposed to feel exclusionary. It’s supposed to feel honest, and it’s supposed to feel true to many aspects of my experience. But for me to ignore that criticism and not to take it in would really go against my beliefs and my education in so many things. And I think the liberal-arts student in me really wants to engage in a dialogue about it, but as I learn about engaging with the media, I realize it’s not the same as sitting in a seminar talking things through at Oberlin. Every quote is sort of used and misused and placed and misplaced, and I really wanted to make sure I spoke sensitively to this issue.”

So, a show about 4 straight, able bodied, cisgender, White women isn't supposed to feel exclusionary? Uh huh.  How exactly could Dunham believe for one moment that it could be anything else? I love how she preemptively declares the use of her quotes as potentially problematic. She isn't concerned about speaking sensitively, she is concerned about being called out on the product which she has created.  I wonder if Dunham realizes that the narrow focus of Girls speaks very loudly about her experiences?


“I wrote the first season primarily by myself, and I co-wrote a few episodes. But I am a half-Jew, half-WASP, and I wrote two Jews and two WASPs. Something I wanted to avoid was tokenism in casting. If I had one of the four girls, if, for example, she was African-American, I feel like — not that the experience of an African-American girl and a white girl are drastically different, but there has to be specificity to that experience [that] I wasn’t able to speak to. I really wrote the show from a gut-level place, and each character was a piece of me or based on someone close to me. And only later did I realize that it was four white girls. As much as I can say it was an accident, it was only later as the criticism came out, I thought, ‘I hear this and I want to respond to it.’ And this is a hard issue to speak to because all I want to do is sound sensitive and not say anything that will horrify anyone or make them feel more isolated, but I did write something that was super-specific to my experience, and I always want to avoid rendering an experience I can’t speak to accurately.”


Yes, Dunham did manage to avoid tokenism, but the cost of this decision was absolute erasure.  I don't understand why marginalized people always have to either be erased or tokens.  Neither one is a good option and they speak to a failure on the part of historically privileged people to step outside of their own frame of reference.  I was scared to get it wrong, so I didn't even try, isn't a suitable excuse.

It's obvious that the experiences of Black women and White women are extremely different.  What Dunham could not be bothered to do was research.  There are so many resources to learn about historically marginalized people.  Did Dunham lose her library card?  Did the internet go down?  Did someone burn all of the books and movies written by women of colour?  What about the numerous webseries that have been created by people of colour?  Did they all somehow cease to exist?  The truth is, Dunham didn't feel like putting in the effort and no matter how many pretty phrases she employs, nothing can obscure this very basic fact.

It is only now that Girls is receiving critique that Dunham is worried about appearing to be sensitive.  Where was her concern when she was writing the first season? To still claim that the homogenous nature of the show was an accident, is an insult to the intelligence of people of colour.  Nothing accidentally ends up all White.  Dunham made a conscious decision to base Girls on her experience, and in so doing, set up a framework that is absolutely exclusionary.  It makes me wonder if Dunham has any friends of colour, or if she, like so many liberal White people, lives a life in which she rarely interacts with people of colour? But that isn't racist is it?  It just magically happens.

Dunham doesn't even acknowledge that despite her justifications that erasure is racist.  How can one set a story in NYC for crying out loud, without any people of colour?  For that matter, where are the GLBT people?  No, Dunham is more interested in apologism.

When I originally wrote about Girls, I was told that if people of colour don't like it, then we shouldn't watch it or create our own.  This does not acknowledge the gatekeeping that occurs in the media.  Not watching Girls does not make the harm of an all White, straight, cis, able bodied world suddenly disappear into the ether.  The fact is, there is a segment of the population watching Girls and internalizing this erasure as normal.  We still have to interact with these people on a daily basis.  Anything that affirms privilege is actively harmful to us and I don't care about how "sensitive" Dunham is trying to be in the wake of this.
Posted by Renee at Tuesday, May 08, 2012