Have you ever come across something so triggering that you immediately began to cry?  That was the effect of seeing this Middle Passage Atlantic slave trade shackle manacle for sale on Ebay. 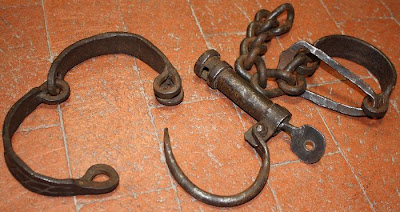 
The following is yet a listing for yet another auction:

This impressive set of child size slave shackles are African made for the Slave Trade, although also found located in the United States from time to time. These are described as being, "crab-shaped rattler leg shackles," on page 20-21, in the book, "THE ART AND HISTORY OF BLACK MEMORABILIA" by Larry Vincent Buster. They measures 6" x 5.25" with an opening of 4.75" x 2.75" and 8" x 5.25" with an opening of 4.75" x 2.5". Based on the circumference of the openings these were of size to be used on children. The oddly-shaped hand-wrought devices contain lateral "pockets" that contain pieces of metal that rattle as the wearer moves about so that his or her location could easily be determined by the sound of the rattle being made. Each has a pair of small chain links attached at the top. One shackle was placed on each leg and a chain threaded through the attached rings, secured with a lock. A museum quality, important historical pair of Child's Size Slave Shackles, having a natural patina that would be excellent for display. (2 items).

Looking at the images from the first auction, I saw a white hand holding the shackle.  So, not only is the person a beneficiary of the slave trade, they intend to further profit monetarily from the very shackles that were used against people of the African diaspora.  These are not benign artifacts and no White hands should own them, let alone seek to make a profit from them.  It is absolutely unconscionable.

Slavery may have ended hundreds of years ago, but Blacks continue to live with its after effects, while White people continue to live in privilege. Just a few hundred years ago, that manacle would have been worn by my son.  His back would have shown evidenced of being whipped, and he would most likely be half naked, hungry and illiterate.  If he were lucky, we would have been given a few blessed years before being separated from each other.  He would not have been deemed a person, and he would exist with absolutely zero rights.  His labour would be used to enrich the planter class, and he would learn to answer to nigger, and never to make eye contact with anyone White -- lest they view him as a threat.  For the entirety of his life, no matter how much he matured, he would forever be called a boy. When he reached the end of his life, and they could no longer benefit from his labour, he might be set free for the purposes of starving to death, or they might put him down, just as they put down an animal. That is what these manacles represent to me.

Just yesterday, my youngest son had his first racist incident. He was told by a fellow classmate that he didn't like him because he is Black.  For those who are not aware, Mayhem is six years old. At six years old he has already been told that the colour of his skin makes him different and therefore unacceptable. Slavery may no longer be legal under the law, but White privilege continues to do harm to people of colour.  Today, there are more adult Black men in prison, than there were in chains.  We continue to be educated in failing schools, erased from the media, and impoverished.  We live with the legacy every damn day, and still yet, it is White people profiting through the sale of these relics that belong in a museum, so that they can stand testament to what was done to us.

I don't have tears enough to mourn for what has been done to us, and continues to be done in the name of White supremacy. For all of this, White people still have the nerve to ask why we are angry and not content with our lot in life.  Bringing up race, is to play the race card.  We are expected to be mute and thankful with how far we have supposedly advanced.  Well, this is what advancement looks like, and it is still ugly.
Posted by Renee at Wednesday, May 09, 2012