If you are a marginalized person, chances are that you are you are used to watching media in which people like you are completely erased, or reduced to typical tokens that are grating.  I recently tuned into Bunheads, after reading about Shonda Rhimes tweet regarding the show: 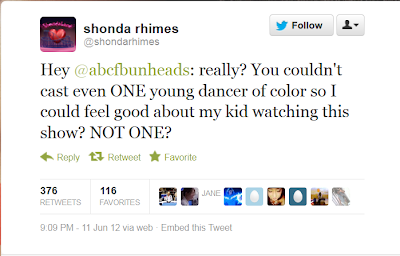 After watching two episodes, this seems to be a very legitimate complaint to me. There is no justifiable reason why people of colour are absent from this television show. Unfortunately, Bunheads creator Amy Sherman-Palladino decided to ignore the homogeneity of Bunheads, to fixate on gender because that's all that really counts.


“I’ve always felt that women, in a general sense, have never supported other women the way they should…I think it’s a shame, but to me, it is what it is.”

Do you hear that folks, Rhimes is being disloyal to the great hive of womanhood for daring to point out that Bunheads is racially exclusionary.  Before I go any further, let me just say that so far what I have seen of Bunheads I really and truly like, with the exception of the storyline regarding the gay closeted father.


I am not in the least bit surprised by Sherman-Palladino's response, as White women have a history of conflating criticism about their privilege to gender disloyalty, as though we all experience womanhood in exactly the same fashion.  The fact of the matter is that Sherman-Palladino will never ever be in a position where the overwhelming erasure of White women in mainstream media would effect her. She cannot say how she would respond because her Whiteness has given her the privilege of being representative of womanhood. If Sherman-Palladino is also straight, cis and able bodied, she in fact  represents the most privileged manifestation of womanhood. As long as we live in a sexist patriarchal world, Sherman-Palladino will always experience gender based oppression, but none of it negates the fact that she is still privileged.  This is a concept that so many seem to have trouble accepting.

Sherman-Palladino used gender as a tool to erase racism and it is a tactic that is quite common.  We all know that White women have a history of standing on our shoulders to achieve their goals, even as they try to pacify us with claims that gender is the primary oppression.  I will never say as a woman that patriarchy and sexism aren't extremely difficult oppressions to negotiate; however, as a disabled woman of colour, I know damn well from my lived experience that gender can never be primary when women have so many other oppressions to negotiate.White women continue to benefit on a daily basis from White supremacy. They are just as guilty as White men for the ongoing racism that people of colour must negotiate everyday of our lives.  Their gender doesn't suddenly making them immune to grasping and wielding social power (shocking I know)

Sherman-Palladino suggests that we live in a colorblind world. Obama is after all in the White house folks, and slavery was so damn long ago.  Easily casting aside race because her show is female centered tells me that only one kind of woman matters to her. All hail the rise of White female power! Was that suitably supportive enough?  I want to make sure I don't get kicked out of the girl bonding club.

Beyond Sherman-Palladino however, the larger concern is, what is all this White dominated media doing to our children? By our, I of course mean children of colour, because White folks have been doing quite well for a long damn time. If I had a daughter, I could not let her sit and watch this assuming that it would be safe for her because it was created by a woman for girls and women because once again, she would find herself erased - invisible in a sphere in which she has ever right to be represented and part of the conversation.  This is a concern that Sherman-Palladino does not have to consider because it will not be her child who will struggle to love herself because of the colour of her skin.

Sherman-Palladino's response makes me wonder what gender solidarity would look like if we were all honest that the monolithic woman is non existent?  What if supporting women actually meant looking at all of the issues that women have to negotiate on a daily basis?  What if instead of holding onto our various privileges, we decided that for the good of women to challenge them?  What would this kind of woman centered movement look like?

I am probably going to continue to watch Bunheads, because I like it and it's easily digestible fluff, but I won't pretend for one minute that within that fluff that there isn't a message which says women like me are even considered worth a token portrayal.  I won't pretend that woman centered means all women.  It really wouldn't have been that hard to create an inclusive program but then, that would mean giving a damn about all women, instead of the most privileged group.
Posted by Renee at Wednesday, June 27, 2012