Motherhood in Game of Thrones 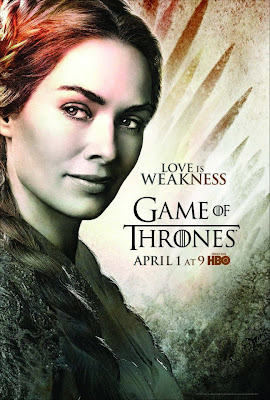 In real life, motherhood is many things. It is love and bonding, affection and protection and most certainly inspiration. Mothers have been inspired to incredible feats over the years on behalf of their children, for their children and for the world their children live in. We have a world where motherhood can be a great strength and a source of great power and resolve.

In Game of Thrones, however, motherhood seems to coincide with victimhood - being a mother is rarely, if ever, a source of strength for the mothers of Westeros, but so often another avenue through which they can be vulnerable, attacked and manipulated

This is, perhaps, clearest of all with Cersei Lannister, Queen of the 7 Kingdoms, and mother of Joffrey, Marcella and Tommen. Cersei has lead a life with little love and a great deal of harshness. A callous father lead to a loveless marriage which in turn has lead to her seeing love as a weakness. She openly advises Sansa not to love because to love is to leave one vulnerable to being hurt. And with that assertion she has another lament - that you cannot help but love your children, she sees her children as an weakness.

And, considering her eldest son, it’s no surprise. Joffrey is, without a doubt, the most evil character in the Game of Thrones. Callous, selfish, cruel, sadistic and not very intelligent, he is a blight on Kings Landing and the throne - and everyone loves it when Tyrion slaps him. Cersei isn’t blinkered to the flaws of her son. She sees what he is and how truly awful he is - and has expressed so with Tyrion on more than once. She has told Sansa that she knows she will not be happy as Joffrey’s queen and she’s fully aware of the atrocities he’s committed, whether it’s slaughtering babies or having prostitutes brutalised.

Yet, she is still driven to protect and support him. She still worries about him when he goes into battle, she still wants to save him, she is still driven to support him. She is bound to the loathsome boy and even as she sees his crimes, she cannot turn away from him. She doesn’t even get any power from being the mother of the king as she is increasingly both outmaneuvered by Tyrion and, ultimately, unable to curb the excesses and foolishness of her son. Her son is a burden, something to endure.