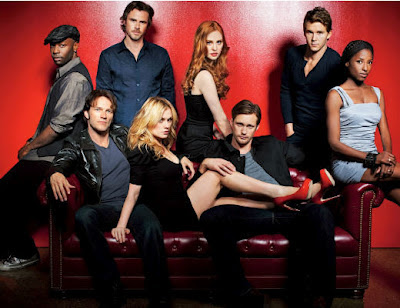 This episode opens with a true blood factory on fire in Huston Texas.  At the compound, a man is tied up on the table and Steve Newlin says a prayer over the body after some sarcastic prompting from Russel.  Salome is clearly not impressed and follows up with her own prayer.  This scene is interesting because it's the first time in history of the show that they have shown full frontal male nudity. It is however worth noting that the nudity was that of a nameless male victim whereas at some point most of the female stars have shown some kind of nudity. In the meantime, Eric wants out of the compound.

Lafayette is in Sookie's bathroom looking at himself in the mirror and Sookie chastises him. Apparently, she wants him to look into the presence she sensed last episode.  Lafayette gets serious and tries to find out about the apparition, but isn't able to.  Lafayette says that he is still going to charge her 100 dollars, to which responds, "put it on my tab." I like the point of Lafayette not playing servant to the other characters, but it does not add to his authority to have Sookie so easily cast her debt aside.  As they sit down talking about Tara, (yeah I know, surprise surprise, Sookie thought to ask) Lafayette gets a message from Sookie's grandmother, who says that she is happy that the fae are looking after her and brings up a box that is under her bed.  This of course casts all thoughts of Tara aside.

Jessica is at the police station trying to defend Hoyt's involvement with a hate group. It seems that they have named the hate group the Obamas because of the masks that they wear.  I found this to be absolutely disgusting. Jessica is worried because she cannot feel Hoyt and says that if anything happens, it's because of her  When Jason reaches out a hand to comfort her, she pulls away from him. I liked this because there is no way she should have been accepting of this considering that they last time they were together he shot her. We flash to a scene of Hoyt tied up and unconscious being dagged on the ground.

Luna and Sam argue because he does not want to leave her alone.  He is off to chase the Obamas, so Luna gets out of bed saying that she is not going to lie in bed like the princess and the pea.  She accuses him of being sexist and Sam is frustrated saying he is only trying to protect the  person he loves. Considering everything that Luna has been through recently, this seems a little spunky agent to me but I do respect the idea of a woman not needing a mans protection.

Terry decides he is going to offer Patrick a fair fight but Arlene is far from happy about this.

At Fangtasia, Tara stockpiles True Blood, but Pam tells her to sell it so that their customers don't feed on humans.   Pam says that they need to keep their heads down, tits up and the True Blood flowing. When the True Blood runs out, it's her plan that they feed discreetly on the humans.  Tara offers to be an air for Pam, because she senses that Eric is in the thick of this but Pam wants know part of it, saying that they are not Oprah and Gayle.

At the compound, Eric confronts Bill about his idea with much sarcasm.  Bill insists that he is not playing a game but Eric suggests that he is laying it on thick and playing against political masters who are out of his league.  Eric out that they are not going to buy this act much longer and Bill asks what if God is a vampire. Eric reminds him that they were high.  Bill says he does not know who to trust because everything he believes has been turned upside down, and so Eric asks if Sookie is food to him now and says that he can have his religious crises elsewhere.  Eric hands him a stick and says that the only way out is with a sample of Salome's blood.

Sookie is going through memories out of the box and she finds out that her parents bodies were found by Sheriff Dearborne.

At the station, Jason assigns men to watch Jessica.  She is sad that she cannot stay and help out, but Jason reminds her with sun coming up, she has to be safe. Jason tries to reassure her saying that this is what he is trained for. Yeah, if I were Jessica, I wouldn't be reassured by that fact because we are after all still talking about Jason Stackhouse.  Andy is online reading the vampire manifestos and he sees a video of them forcing vamps to face the sun.  Apparently, the Obamas are modelling themselves after the Klan and this sets them off to find the dragon.  I am going to take a small break to say how offensive this comparison is.  The KKK is a White power terrorist group and to have Black members of the Obamas just flies in the face of history.  This leads them to beat on the prisoner to try and get answers.

Sookie goes to Bud's briefly asks how he is doing and learns that his colon cancer is in remission.  She quickly segues into her parents death, wanting to know if anything he noticed anything suspicious.  Bud says yes, it could hae been a vampire, but they didn't know about vamps at the time and assumed it was gators. Bud points out that her grandmother was killed because she associated with vampires and this does not make Sookie in the least bit happy  Sookie begins to read his mind and hears that he is hiding something, and so she grabs his hand, but is hit in the back of the head by a woman with a cast iron frying pan.