An All White Emmys Again 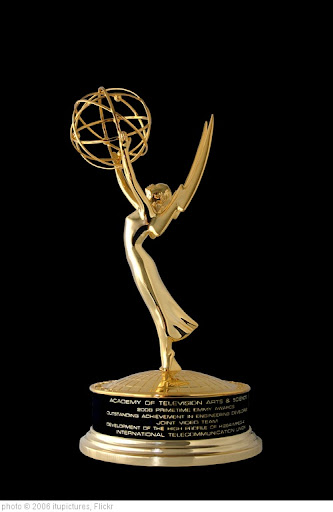 I tuned in last night to watch the Emmy's, and to root for some of my favourite actors and actresses.  Despite the idea that the media is so incredibly left leaning, and progressive, last night's award show was yet another stunning display of privilege - everyone who picked up a golden statue was White. Surprise, surprise, surprise. With only Idris Elba, Don Cheadle, Loretta Devine, Maya Rudolph and Giancarlo Esposito nominated for awards, there were few actors of colour nominated to begin with, but to see not a single one of them recognized for their work, was quite simply put exclusionary racism in action.  Oh they'll invite you to the party, but then watch you like a hawk to make sure you don't run off with the good silver.

Just to make sure that we knew our place, Tracy Morgan spent a good deal of time, lying down on the stage pretending to be hurt, in a gag meant to set twitter speculating that he might be ill.  Yes, I get that this is a play on the fact that Twitter regularly kills people off, forcing celebrities to release a statement declaring themselves to be alive, but this read as reductive. If that were not enough, Morgan also did a bit with Kimmel and he called for his cousin Kool Aid to join him. I am not at all surprised that it was Morgan who agreed to take part in this act. Just because you manage to get a Black person to participate, does not mean that it isn't racist.

The life of an actor of colour is very difficult because though there are a plethora of roles available, far too often, they are cast into stereotypical roles, while the best jobs go to White men and women. In our supposed post racial world, it is still socially understood that an actor of colour is supposedly a risk because White audiences are understood to have difficulty identifying with them.  The entire idea of modern media is to provide an escape from the real world and engage in flights of fantasy, but somehow, an actor of colour ruins the fantasy, thus reducing the level of enjoyment.

I was in absolute shock when Esposito didn't win the award.  I watched the last season of Breaking Bad sure in the belief that his brilliant work would be acknowledged. No one else could have played Gustavo 'Gus' Fring better. Even Aaron Paul, also from Breaking Bad, who won Best Supporting Actor in a Drama Series, took the time to acknowledge his excellent work.  There is no doubt that Paul gave great performances, but it was not even in the same league as Esposito. If a performance such as this can be overlooked, it suggests that they never had any intention of being inclusive on who was rewarded. Nominating actors of colour feels more like an attempt to appear race neutral, than an effort to acknowledge and praise their work.


What does it say that in this day and age when there's so little good representation in the media that actors of colour continue to go unrecognized, when they do manage to finally find work?  What does it tell young people of colour about the possibility of success in the future?  As a viewer, we are meant to believe that the awards are all unbiased and neutral (this is after all why accountants either make an appearance, or are mentioned), but when every single award goes to someone White, the only way to continue with the belief of neutrality, is to internalise the idea that Whiteness is naturally better.

It would have been bad enough if the erasure of actors of colour were simply this year's Emmys, but the truth of the matter is that these award shows have a long history of this exclusionary behaviour. There are still categories which no Black actor has ever won (this in supposedly post racial America).


If Esposito had won Best Supporting Actor in a Drama for "Breaking Bad," or if Rudolph had won the Comedy Guest Actress Award for "Saturday Night Live," they would have become the first black performers to win in their respective categories ever. Cheadle would have become only the second African-American in history to win Best Lead Actor in a Comedy for "House of Lies." Elba was nominated for Lead Actor in a Movie/Mini for "Luther" and Devine for Guest Actress in a Drama for "Grey's Anatomy." The news isn't as shocking considering only 5 percent of black actors have won awards in the 63 years of the Emmys. [source]

When this sort of issue is brought up, it is often suggested that we focus on our own awards, but this is not a solution.  Award shows like the Emmys and the Oscars portend to represent the entire industry but that is certainly not what they are doing.  What we need to advance is mainstream inclusion, not special side projects; separate is not equal, as we have seen over the decades. Year after year, what is presented as inclusion, is nothing more than yet another extravagant display of White hegemony.What we have been offered are crumbs from the masters table and this will never be acceptable.  Even with the population demographics shifting, Whiteness still refuses to loosen its hold on power. If they are not going to award the work of actors of colour, they might as well rename the show to the White Emmy awards because the exclusion is obvious to anyone watching.