Talking To Your Kids About Teachers and Unions 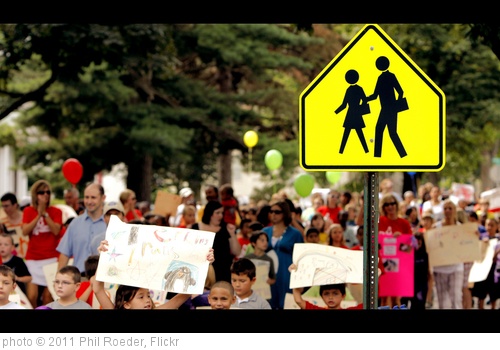 I know that in the U.S., people are a flutter about the continued teachers strike in Chicago and here in Ontario, we are also having our own issues.  Our liberal provincial government has gotten into bed with conservatives to pass terrible legislation for teachers.  Though we got the song and dance about how the government and the populace are concerned about the education of children, as well as dealing with a rather large deficit, the truth of the matter is that striking teachers means a daycare issue for parents, which results in a loss of productivity for businesses.  Most people don't have someone they can rely on in a pinch when schools are suddenly shut down, and so parents are forced to call in sick.  This was about keeping things convenient for adults and businesses and not about advancing education in Ontario.

My conversation with my kids about this began last Wednesday, when they noticed all of the teachers wearing black.  Since my kids go to a French core school, much of this will not effect them directly because the Francophone board has already agreed to the premier's plan and so I can only assume that the choice to wear black was in support of the other boards who continue to fight.  All of the black clothing seemed very odd to Destruction, and he actually wondered if someone had died.  I am a little disappointed that the teachers didn't explain what was going on to the kids, but it did give us an opportunity to talk about the role of workers rights and unions.  As you might have guessed, the unhusband and I support the teachers.

The government is dealing with a 15 billion dollar deficit and for teachers it means having sick days reduced from 21 to ten, a wage freeze for two years, no longer being allowed to carry over sick days or cashing them out at retirement and my personal favorite, being forced to work three days a year for free.  The bill does not effect young teachers who will move up the pay scale as a result of time on the job, or increased education.  I don't know about you, but I wouldn't work for anyone for even an hour for free, let alone twenty-four hours.

The unions asked teachers to work to rule for one day, but in some cases, some teachers have cancelled clubs, sports, bands etc,. for the entire year.  The conversation has now shifted to how mean teachers are and of course the suggestion that they are taking out their frustration with the government on the kids.  This argument absolutely infuriates me.  Teaching is hard work, it's underpaid and does not get the respect that it deserves.  Work to rule probably won't effect my kids but if it does, I know it will be a huge disappointment for Destruction because he is heavily involved in the choir and the volleyball team.  Given the tenseness of the situation, I told Destruction that should this happen, any ire he would feel should be directed at the government.


Right now he has no idea of what it means to work for a living and the pressure to always do more for free.  Not volunteering to do more is seen as the sign of a bad employee.  All of these clubs, sports, bands etc,. exist because teachers willingly volunteer their time, but it seems that the public sees their volunteer efforts as part of their job.  To me, it stands as just another example of how teachers are taken for granted and their labour is not valued.  Just because you would like your kid to be on the soccer team, does not mean that she or he is entitled to be a part of the team.  For many kids from poor and working class families, these sports teams and various clubs provides them with an opportunity they would otherwise miss because their parents cannot afford extra curricular activities.  This to me stands as yet one more reason why parents should be grateful to teachers for their efforts and support their requests.

I told Destruction that the day would come when he would be forced to sell his labour to survive, if he didn't own a business and in many cases, this would mean he would not receive fair payment for his time and efforts.  Though union density rates are higher in Canada than the states, this is largely because Canadian unions refused to engage in business unionism and roll back hard won gains, but that does not mean that a higher density rate wouldn't help all workers.  The truth of the matter is that in every industry, you will get paid as little as they can get away to ensure a larger haul of the profits.  Real wages have not kept up with inflation, causing many to live on cheap widely available credit until recently.  Workers are working harder for less pay and there is no sign on the horizon that this is going to change.

I told Destruction that this work to rule campaign is about his future.  If the government can just ban a group of public service sector employees from striking what is the next step?  I can agree with such a ban for positions like police, firefighters, and nurses because they are essential service workers, but beyond that, workers need to have the right to fight for better employment conditions, higher salaries and pensions.  I asked him what he would like to have when he finally gets off my wallet and how he would like to feel powerless to create change.  I talked to him about the rising cost of essential items by explaining about the doubling of our house insurance over the past 12 years, though we have never made a claim and have not made significant changes to our home.  Our insurance has doubled but should the worst happen, we are not entitled to a dollar more in replacement value than we had 12 years ago.  Think about that for a moment.  I talked to him about how much his grandmother spent on food weekly to feed our family when I was a child, versus how much his father and I spend today. I talked to him about the ridiculous increase in our water bill over the years as well.  In this way, I explained how a wage freeze puts teachers behind for their entire working career.  I asked him to think about the fact that teachers also have families to take care of and how a wage freeze would effect their families.

This was a lot of information for him to absorb but I didn't want him to feel like the pawn that the media and government are setting him up to be by their constant what about the kiddez whine. Yes, work to rule would effect his chance to participate in activities that he enjoys, but in the long run, strong unions and fighting legislation that weakens workers rights has a much more far reaching effect on his life and future economic goals and needs. In the end, I told him that he didn't have to believe what his father and I believed but to think through the issues himself without the media bias.  Over the coming days, we will discuss this topic again and this time, I will listen far more than I speak, in order to hear what he thinks and why.  I felt it was important for him to think critically about the issues of the day in this case especially, because the idea of legislating a loss of workers rights is absolutely abhorrent to me. He may not see things the same way that his father and I do, but at the end of the day, at least his opinion will be informed.