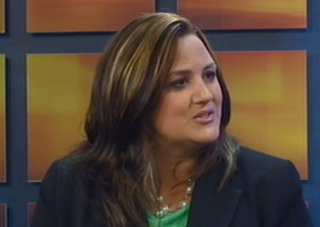 If you are a woman, you are no stranger to body policing.  No matter how beautiful, or successful you are, people will always look for a flaw and suggest ways that you can change to better conform to the straight male gaze.  Stars like Katie Couric, Demi Lovato,  Salma Hayek and Lady Gaga, have all been very public about their struggle with body image and disordered eating.  Tyra Banks famous response to the fat shaming that she received, when critics felt that she was letting herself go, is but one example of a woman having to stand up against the belief that there is a size standard to which we all must conform.  If you happen to actually be a fat woman, the pressure and the scrutiny intensifies in proportion to your weight.

Jennifer Livingston is a morning news anchor for WKBT-TV in La Crosse, Wisconsin and recently she was sent the following letter from a viewer, which her husband later posted on his Facebook page.


Hi Jennifer,
It’s unusual that I see your morning show, but I did so for a very short time today. I was surprised indeed to witness that your physical condition hasn’t improved for many years. Surely you don’t consider yourself a suitable example for this community’s young people, girls in particular. Obesity is one of the worst choices a person can make and one of the most dangerous habits to maintain. I leave you this note hoping that you’ll reconsider your responsibility as a local public personality to present and promote a healthy lifestyle.

Thankfully, Livingston was given the opportunity to respond by the station and she said in part:


“Yes, the truth is, I am overweight. You could call me fat and, yes, even obese on a doctor’s chart. But to the person who wrote me that letter, do you think I don’t know that?”


“You don’t know me. You are not a friend of mine. You are not a part of my family, and you have admitted that you don’t watch this show. So you know nothing about me, but what you see on the outside. And I am much more than a number on a scale.”

Her response went viral for one simple reason, it resonated with people. All of us at some point have been judged and the more outside of the supposed norm we are, the more likely we are to have experienced this sort of abuse.

Fat is a very stigmatized identity and it is considered by many to represent a moral failing. Fat is associated with gluttony, a lack of control and slovenliness. These negative attributes attach themselves to fat people regardless of how active, engaging or beautiful they are. Fat is deemed so negative that women are starving themselves, and binging and purging to avoid the label of fat.  I think that it is fair to say that this is extreme, but in a world in which fat people are largely erased, policed and shamed, is it any wonder that we have pro anorexia sites littering the internet?  Before young girls know how to do long division, they are already considering dieting.   The reason that diet products, fat free foods etc., are largely aimed at women, is because some women live perpetually on a calorie restricted diet for fear of gaining any weight all.

Renee
Niagara Falls, Ontario, Canada
I am the mother of two darling little boys that fill my life with hope. They have inspired me to help raise awareness of the issues that plague this little blue planet. If you are looking for a blog that is all about how wonderful and rosy this world is, turn right because this space will not be for you. I am a committed humanist. I believe in the value of people over commodities. I believe in the human right to food, clothing, shelter, and education. I am pacifist, anti-racist, WOC. My truth may not be your truth, but I intend to speak it nonetheless. Please feel free to direct questions or commentary womanistm[email protected]