This is the last episode of season 1 for what has quickly become one of my favorite webseries - the Unwritten Rules. If you have enjoyed the series and can afford it, the producers need some help raising the funds to create a second season.

Parenting and a GLBT Perspective

Parenting is very much in the news over hear at the moment, what with Kate’s pregnancy becoming an all-consuming obsession of truly epic proportions. And I have a lot of feelings around this.

Firstly, I’m not exactly jumping for joy for the same reason that I wasn’t jumping for joy about their wedding. I don’t wish either of them ill, but nor am I going to join in something that is so utterly and completely dependent on them being straight – because we know if it were 2 princesses or 2 princes up there announcing their upcoming baby, there wouldn’t be this fawning adoration, no way.

But this leads to my general thoughts about parenting and the hugely thorny issue it is with me and GBLT people in general.

Not least of which is my still trying to unlearn enough bullshit to consider myself as a parent. This is one of the problems of growing up in a homophobic society, you learn all kinds of negative lies about yourself that then need to be brought down. In my head I can’t consider parenting as more than an abstract because I have always always always been told that it was an utter impossibility to me.

It shouldn’t be a surprise, the powers that be continue that meme. How many times during the battles for marriage equality have the bigots used children as a red herring? How marriage is for the raising of children and how could we forget that? Because we never ever have kids, right? Or Tory MP David Davies (who takes a prize for the worst gay friend excuse with “I’m not homophobic, I once punched a gay man”) who thinks most parents don’t want gay children because, among other reasons, they want grandchildren. Because I could never produce grandchildren for my parents.

Jesse Lee Peterson is a vile man.  Not only is he a disgusting sexist, he is the absolute definition of sell out.  He is absolutely Uncle Ruckus come to life and would probably rejoice if he woke up tomorrow as a White man.  Peterson makes up statistics about how Blacks hate Whites and essentially nods his head in agreement with every damn thing so-called Fox News Pundits say.  This is a man who has in the past said that Blacks were better off during Jim Crow.  Finally fed up with him, Dr. Michael Eric Dyson told the hard truth about Peterson backstage after their appearance on the BET show, Don’t Sleep with TJ Holmes   I doubt it will change a damn thing that the man does, but at least we are getting public acknowledgement that his type of self hating vitriol is damaging and should not be accepted as legitimate discourse.


transcript is below the fold 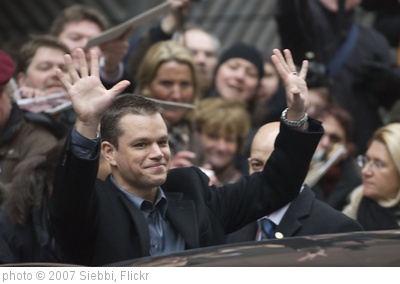 When discussing his upcoming biopic Behind the Candelabra, in which he stars with Michael Douglas, Matt Damon had the following to say.

First Damon addressed why he’s never addressed the rumors that he may be gay:

I never denied those rumors,Because I was offended and didn’t want to offend my friends who were gay, as if being gay were some kind of fucking disease. It put me in a weird position in that sense.”


“These two men were deeply in love and in a real relationship – a marriage – long before there was gay marriage. That’s not an insignificant thing,Their conversations when they’re dressing or undressing or having a spat or getting ready for bed? That’s every marriage.”

“It feels like you’re witnessing something really intimate you would normally see with a man and a woman, but instead it’s two men, which was thrilling. There’s stuff I think will make people uncomfortable. Great. It’s HBO – they can change the channel.”

Damon is also sure to give his costar Michael Douglas praise for his performance and noted that both actors have many gay friends so they did not want to mess up their intimate scenes or “bullshit it”:


“Michael was a wonderful kisser. Normally I’d say no to nudity, but I just did a lot of it. … I mean, it’s tastefully done,. But this movie’s not going to be for everyone.”

The following video contains a discussion of victim blaming, slut shaming and rape.


the transcript is below the fold.