Dear White Ladies Are You Still Doubting Your Privilege?

Over the years, one of the conversations we have repeatedly engaged in is a discussion of White privilege and how it relates to White women.  Every time this subject comes up, there is a solid round of denial, coupled with reminders that White women face sexism, as though we are capable of forgetting this fact for one minute.  What many continually fail to comprehend, is that most people who are marginalized, also have a degree of privilege in at least one area.  Unless you are a Non- Western, disabled, gay, trans woman of colour, who is poor, baby you got privilege in abundance. To hear many so-called liberal White women tell it, that's not the case.

Below you will find some images from the recent Sports Illustrated Swimsuit Edition, which have a recurring theme. I'll give you three points if you can guess the privilege. 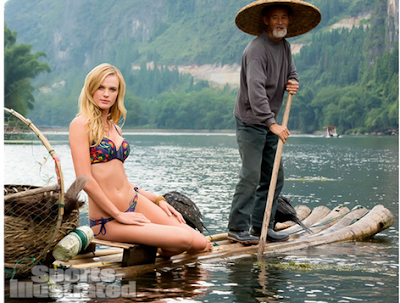 hmmm, is it me, or might this image be a touch problematic?  What about this one? 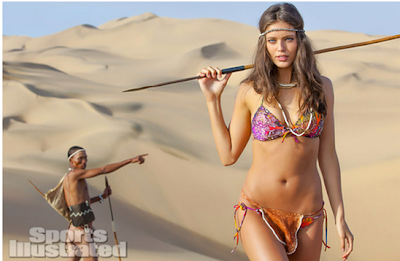 Have you figured out the problem yet? Can you tell from the images where these pictures were taken? Well, try China and Africa. That's right, Sports Illustrated managed to travel outside of the U.S., but somehow couldn't resist making Whiteness the feature element in each shot.

The women are indeed scantily clad in bikini's to service the straight male gaze but they are central to the stories being told in each image, whereas; the people of colour are little more than exotic props in the background. Could you for a moment imagine a reversal of this image, with people of colour in the forefront and White people as props?  I bet you can't, because when it comes to race, the media is not interested in promoting anything other Whiteness as the defacto standard for humanity.

These images sell sex but they also very directly sell White supremacy.  As much as these women are being reduced to objects for consumption, their Whiteness assures that they are still in a position of power relative to the people of colour.  In the one in China, the Asian man is actively working in service of the White model, while she leisurely reclines.  This quite accurately describes the kinds of power White women have historically been able to rely upon.  Wherever they have gone, they have been able to count on their Whiteness to subjugate people of colour, even as they have been oppressed by White male patriarchy.  POWER.  It is only invisible if you choose to ignore it.

Even though these images are shot for the White straight gaze, each one of these models had to actively choose, whether or not to participate.  So even as the images themselves raise some issues regarding sexism, one cannot ignore the active choice that was made.  Not only did these models benefit through the active assertion of the worth and value of Whiteness, they benefited economically.  This is yet another stark reminder that White women have historically and continually benefited socially and economically from racism and colonialism, even as they are oppressed by gender.  The real problem for White women has never been about achieving universal equality but about achieving and maintaining equality with White men.