The Problem With Numéro's African Queen

Yes we have yet another magazine tying to justify its inclusion of Blackface.

The above image is of the ever so White, blond-haired, blue-eyed model Ondria Hardin. The image appeared in Numéro magazine n°141 of March 2013 and was photographed by Sebastian Kim.  I don't know how any editor could possibly look at the image and declare it fit to print, given the continual outrage which occurs each time any magazine has chosen to engage in Blackface.  This isn't a case of artistic license but the absolute perpetuation of White supremacy.

Numéro has since issued the following apology:

Some people have declared that they have been offended by the publication in Numéro magazine n°141 of March 2013, of an editorial realized by the photographer Sebastian Kim called “African Queen”, featuring the American model Ondria Hardin posing as an “African queen”, her skin painted in black.

The artistic statement of the photographer Sebastian Kim, author of this editorial, is in line with his previous photographic creations, which insist on the melting pot and the mix of cultures, the exact opposite of any skin color based discrimination. Numéro has always supported the artistic freedom of the talented photographers who work with the magazine to illustrate its pages, and has not took part in the creation process of this editorial.

For its part, Numéro Magazine, which has the utmost respect for this photographer’s creative work, firmly excludes that the latest may have had, at any moment, the intention to hurt readers’ sensitivity, whatever their origin.

Numéro Magazine considers that it has regularly demonstrated its deep attachment to the promotion of different skin-colored models. For instance, the next issue of Numéro for Man on sale on 15th march has the black model Fernando Cabral on the cover page, and the current Russian edition’s cover of our magazine features the black model Naomi Campbell on its cover. This demonstrates the completely inappropriate nature of the accusations made against our magazine, deeply committed to the respect for differences, tolerance and more generally to non-discrimination.

Considering the turmoil caused by this publication, the Management of Numéro Magazine would like to apologize to anyone who may have been offended by this editorial.

Right, so it's not racist to put a person in Blackface no matter what Black people have to say about it, as long as your intention is to show diversity.  Of course, it's absolutely not diverse to show real people of colour, when you can use White people to stand in for them.  Everyone should be able to agree that a racist image is just as good as real representation, after all, they have the future of White supremacy to think about.

It's also shocking that anyone could potentially declare Numéro magazine racist, simply because of one model covered in dark makeup. What's a little Blackface between friends, when you have people like Naomi Campbell on next month's cover?  Just count the Black people. Count them I say. This proves that Numéro isn't at all racist.  Someone should have told Numéro that if we have to be instructed to count Black people that this in itself, is an indicator that there is most definitely a race problem. Racial integration should be seamless, in that people of colour should be easily visible alongside their White counterparts, rather than a few standouts to avoid being labelled racist. Furthermore, using the people of colour associated with the magazine to reject being labelled a racist, is exactly the same deflection of "hey, I have Black friends," and is not only ridiculously unbelievable but racist as well.

At this point, I have become so accustomed and in fact jaded about shitty apologies that this didn't even cause me to bat a single eyelash.  Quite simply, when you engage in something this obviously racist, there is no apology that could possibly make up for it.  The damage has already been done. In the game of bad apologies, Numéro's was pretty horrendous but I have to say that Sebastian Kim was at the very least, equally as bad. 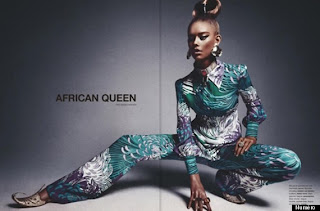 I would like to apologize for any misunderstanding around my recent photos for Numero France. It was never my intention (nor Numero’s) to portray a black woman in this story. Our idea and concept for this fashion shoot was based on 60's characters of Talitha Getty, Verushka and Marissa Berenson with middle eastern and Moroccan fashion inspiration. We at no point attempted to portray an African women by painting her skin black. We wanted a tanned and golden skin to be showcased as part of the beauty aesthetic of this shoot.

It saddens me that people would interpret this as a mockery of race. I believe that the very unfortunate title “African Queen” (which I was not aware of prior to publication) did a lot to further people’s misconceptions about these images. It was certainly never my intention to mock or offend anyone and I wholeheartedly apologize to anyone who was offended.

All right, I'm a good sport and can say that if the photographer was not responsible for the title that does make him possibly a little less of a douchbag than Numéro; however, he still thought it was a good idea to paint a young White woman with dark makeup, in order to have appear as a race to which she doesn't belong.  Does he actually expect a cookie and a round of applause for that?  Even if we remove the label of 'African Queen', the image in and of itself is still patently racist because no White person can ever represent a person of colour in this fashion.  If he wanted a Middle Eastern look, the way to go about it was to use a Middle Eastern person. That seems logical to me.

Ultimately, the intention of the magazine or the photographer is meaningless. Intent is not some magical elixir against harm.  This is especially true when it comes to something as blatant as this. It is not reasonable to suggest that both Numéro and Sebastian Kim had no idea of the furor these images would cause when they were released to the public.  People of colour have repeatedly spoken out about such engagement whenever and wherever it has appeared.  It is far more likely that they hoped to be perceived as edgey, the new hipster code for ironically racist.  Apologizing after the fact, "if people were offended," is not ownership of said offense and does not negate the harm done.  So in short, fashion magazine editors and photographers, just stop doing racist offensive shit because at this point, not only does the public not believe your intent was benign, your apologies suck ass as well.