Sometimes, you see something that no matter how hard you try, you simply cannot unsee.  Your choices are to either move away slowly and hope the image fades, or take the opportunity to shock or gross out the people around you. Guess which I am going to pick?

Yesterday, I was chatting with a friend of mine, whom I have secretly nicknamed the goddess of sex toys, for her extensive collection and knowledge.  Actually, I think I am going to name her because she should take responsibility for showing me this horror.  So you can all blame HOLLY from Woman Tribune for what you are about to see.

I love the supernatural, as you might well imagine given my other blog Fangs for the Fantasy, I spend quite a bit of time watching movies and television, as well as reading books about vampires, werewolves, ghosts, dystopian worlds and yes the ever popular zombie. As much time as I spend delving into speculative fiction, what I don't do is fantasize about it.  I am a big believer in your kink is not my kink and moving on, but sometimes you just have to pause and wonder what people are thinking.

Note: following image IS NOT SAFE FOR WORK 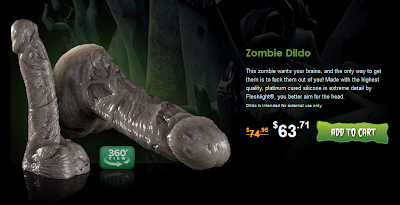 Like many, I am a huge fan of The Walking Dead and I am really looking forward to World War Z coming out in the summer but isn't a zombie er, dildo just a touch off?  I mean, you are essentially pretending to play with a dead man's junk. There's macbre and then there's just plain eww and in fact more eww.  Does it come with that not so fresh rotting flesh smell?  I suppose there's some relief in not having to worry about becoming infected because of course, the junk does not have teeth or the ability to do anything other than scratch a particular itch. Saying the mantra of this kink is not my kink and it's okay, but still major eww.

I have written before about the ability of my friends to send me the weirdest shit but this, this,  I just don't have the words for.  Even after I scrubbed my eyes, I kept saying but why?  Why did HOLLY even mention this? Is it because she's weird, or is there something about my love of dystopian fantasy that hinted I might be totally into this? Either way, I'm totally scared now. I cannot unsee it and yes, the trauma has set in.  As I said at the beginning of this post that my choice was to share this horror, now you can decide to do with it what you will, but at least I am not alone with the trauma.

Also, I totally blame Sparky because he started the trend by sending me fucking chicken in a can.  It seemed to set off a tidal wave of people sending me the weirdest shit they could think of.
Posted by Renee at Wednesday, March 06, 2013