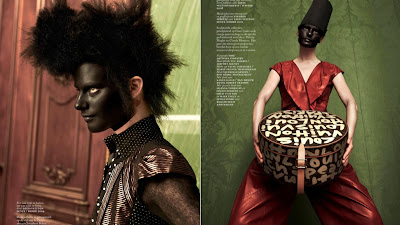 The above image is from Vogue Netherlands. The model is Querelle Jansen, the photographer was Ishi and the stylist was Marije Goekoop. According to Jezebel, the inspiration for these images was Grace Jones and Josephine Baker.  Pause for a moment to think about that.  Both Baker and Jones are iconic Black women and yet Blackface was used. Both of these women encountered racism and actually fought against the limitations placed upon them therefore; it's is horrifying to see their legacy represented this way.

This cannot simply be reduced to an artistic vision; it's absolutely racist.  Blackface has been a recurring theme in fashion magazines the last few years and each time, it's defended as art and Black people are told to simmer down because our offense is disruptive to their vision.  The frequency of Blackface in fashion magazines cannot possibly be defended as accidental, or art, when the complaints and charges of racist images has been quite vocal and continually ignored.

One of the things that disturbs me about the constant forays into these  racist images, is the fact that actual Black models have an extremely hard time breaking into the industry and they are underrepresented in magazines and on runways.  Instead of hiring a Black model, the fashion industry constantly resorts to Blackface, as though this is the only possibility of representing people of colour. It is yet another slap in the face and reminds Black people that we are disposable and that our culture and very lives are meaningless in the face of White supremacy. In short, these photos show proof of the continual colonization of our bodies.


Art is often seen as progressive and challenging the status quo, but what do these images represent but a strict adherence to White supremacy, which has absolutely been historically ingrained globally. These images are purposeful and meant to inflict pain, along with a reminder that POC can only take up the space which Whiteness allows because they remain in power.  These images come down to Whiteness' continual desire to define and control POC.

I know that it will only be a matter of time before I am writing yet another piece on this same subject because Blackface in the fashion industry has become a trend.  It seems that no amount of commentary about its racist nature, or any consequences that POC and our allies deliver, will change the determination that this constitutes an appropriate course of action, or represents avant garde art. The only possible positive which can be gained is that they stand as proof that we are far from post racial and that overt forms of racism do continue to exist, despite the complaints regarding our supposedly politically correct world.

The more threatened Whiteness becomes by the changing global racial demographics, or the perception of a loss of power, the harder they will fight to maintain their supremacy.  It will result in repeated incidents like this, followed by justification and denial even in cases like this which clearly displays an extremely high level of intent. We must continue to make it clear that racism is not acceptable and challenge those who seek to separate themselves from such incidents, or to declare that they are acts in isolation, rather than a visual representation of the systemic oppression which people of colour face. This is an act of Whiteness and a desire to seperate oneself from this ugliness, is only evidence of how much further one has to travel.
Posted by Renee at Thursday, April 18, 2013