Bullying and Where Are the Parents? 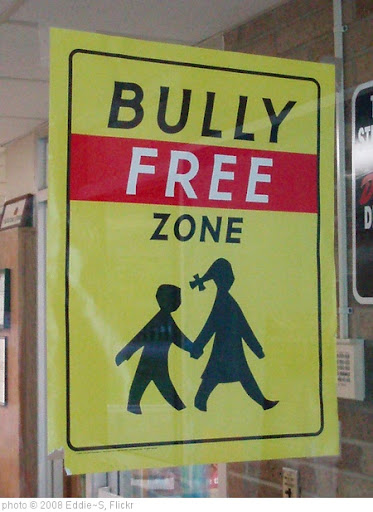 I have come to hate the term where are the parents because it ignores that parents can dedicate every waking minute to fighting for their kids and not make any progress because the system is not designed to be helpful.  I have also come to hate the term zero tolerance policy in reference to bullying because it's a lie. When my children were born, I promised to love them unconditionally, to support them and fight for them whenever necessary.  I have kept this vow but it has not been easy. The first time my oldest son was bullied, he was five years old and he was being called "brown boy." Today, the taunts have escalated and now he is being called the N word.

For the last two years, one boy on my son's bus has delighted in being a bully.  My son hasn't been his only victim but being Black, he is the only one being called a racial slur. I have talked to the school bus company and the principal and the best I have managed is to get the child booted off the bus for a week at a time.  This means my son gets a week of safety and comfort but as soon as the boy starts riding on the bus again, the process starts all over. In desperation, I called the NRP (Niagara Regional Police), hoping to push the idea that this amounted to harassment, but they wouldn't even take a report, let alone go out to the school and talk to the child in question or investigate.  They advised me to tell my son to just ignore the racial slurs and to tell him that the bully was simply maladjusted.  Apparently, what the bully is doing is not a crime.  I suggested that this situation was going to end up with my son seriously hurting this kid, the kid seriously hurting my son, or my son in a body bag, because this is what happens when bullying is ignored. The cop was quiet for a moment and simply said these things happen.  Apparently, someone has to be hurt or die for this to be taken seriously.

At present, I am trying to get in touch with the superintendent and getting the run around.  This recent incident isn't even a case of my son's word against the bully, because not only did other children confirm his story, so did the bus driver.  When I spoke to the bus company this morning, they admitted that the child in question has a history of this behaviour and promised to have the bus driver try to look out for my son.  How exactly can he look out for my son when he has to pay attention to the road? They cannot even institute a seating arrangement to force the child to sit up front, so that he is away from other children because that apparently would be too stigmatizing. My son has been hurt for two years by this bully but apparently, the bully's fee fees are more important.


So, where are the parents? Well, this parent is fighting to try and protect my child and it is the system that is failing our family.  I don't want to hear condolences after something serious happens, I want my baby boy to go to school in a safe environment and get a good education.  That is what my tax dollars pay for and what I have every right to expect as a Canadian citizen. A parent can call the schools, interact with the school board and even call the cops, but unless the system meets them halfway nothing changes.  Bullying continues to happen because despite their mediocre diversity classes and seminars on bullying, school officials don't give a damn and are not interested in substantive change.

It disgusts me that our story is not unique.  Across North America, there are families just like ours fighting.  We have had parents send their kids to school with stun guns, we have had a mother show up at the bus stop to beat up their child's bully, and we have had a father get on a school bus to cuss out their child's bullies and nothing changes. The parent gets into trouble and even in some cases arrested and charged, but what choice did they have?  There have been movies made about bullying and despite all of the lipservice being paid to ending bullying nothing has changed.  Yet, when a child dies, the refrain is always, "where are the parents?" More fool me, for teaching my son that the right answer is to trust the system to do its job and faithfully report these incidents. Every time there is a PSA on television, they advise children to speak to an adult and promise them that the bullying will stop, if they just manage to build up the courage to tell someone.  It's a lie and they are giving children false hope because it won't stop, even if they have parents dedicated to fighting for them.

So where do I go now? Yes the little ass is banned from the school bus for a week and it will give my son a small reprieve but given his history, it will simply happen again. I also have to worry about my youngest son who rides that same bus everyday.  He has heard the taunts and sees his brothers pain.  Bullying doesn't just effect one person but entire families.  I have demanded that he be removed from the bus or be forced to sit at the front and I don't think that this is asking too much.  I'm tired of being encouraged to have sympathy for the bully.  I was even asked how I would feel if the child had a disability, as though being disabled gives one license to be a bigoted asshole.  This is what they mean when they say zero tolerance - have tolerance and pity for the bully.  Our education system is broken because it is failing in its responsibility to protect marginalized or otherwise vulnerable kids. In short, the parents are here and we are fighting but nothing is changing and our kids remain vulnerable each and everyday this allowed to continue on unchecked.