Racist Reporting in the Boston Bombing 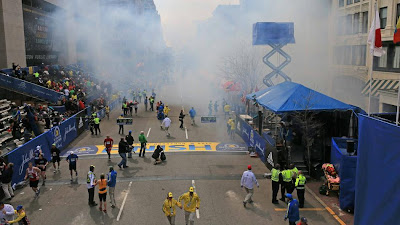 The media is not a neutral source of information. Some stations like Fox, are more blatantly problematic than others but reporters, just like everyone else, are raised in a racist, homophobic, cissexist, ableist society and that means that they have internalized all of the isms and cannot help but reveal their biases in their reporting.  This stigmatizes historically marginalized people and can lead to further oppression and violence.  Already it has been reported that, "Heba Abolaban, a Palestinian doctor who immigrated to the United States from Syria, says she was punched in the shoulder in Malden, Mass., on Wednesday by a man who shouted "F*** you Muslims!" and "You are involved in the Boston explosions," according to the Malden Patch."

As horrible as this alleged attack is, it's not the least bit surprising given the Islamophobic nature of American society.  It certainly didn't help when John King of CNN released that his sources told him that the police were looking for a quote, "dark-skinned man."  Let's have a look at what Reverend Al Sharpton had to say on MSNBC.


transcript below the fold.


Al Sharpton: A reporting error in a painful situation is bad enough, especially with victims and families and so much of the country eagerly waiting to see who will be brought to justice for the murders in Boston. Still, mistakes do happen and we all understand that but there was another part of this failure that deeply troubled me. It was what the CNN reporter John King said when he was describing the person supposedly under arrest.

Video John King: I want to be very careful about this because people get very sensitive when you say these things. I was told by one of these sources who is a law enforcement official that this was a dark skinned male. I'm making a personal judgement forgive me but I think it's the right judgement not to try to inflame judgement.  They say it's a dark skinned male.

In a story like this, reporters justifiably feel pressure to pass along any and all details that they extract from their law-enforcement sources. After all, why wouldn't you? Well, in this case you wouldn't because "dark-skinned male" is useless information that borders on inflammatory. King apparently approached this incident with a mindset of restraint, saying that he withheld certain details that he learned from his killer source. So why didn't he put "dark-skinned" into that same basket?  If the police were searching for this individual, what assistance would the "dark-skinned" description offer? Should King have mentioned that the suspect had two eyes and a nose?

Reverend Al: Not two eyes and a nose but a dark-skinned male. These comments are very offensive. They have no place in our discourse, especially in a time when Americans inspired by the example of the people in Boston are coming together as one. What King's words did was to make every dark-skinned male in Boston a suspect and that's shameful.

This morning we learned that the suspects are two brothers named Tamerian Tsarnaev and  Dzhokhar Tsarnaev and they are most certainly not dark-skinned. Today, CNN is being far more careful and asserting that people should not assume that Tamerian and Tsarnaev are Muslim or had connections to a larger cell.  Both young men had been living in the U.S. for quite some time. If only they had been as careful in their reporting when John King decided to inform the world  about a supposedly "dark-skinned" male of interest.

We watched King's report live and Destruction said, "here we go again," and he was right. "Dark-skinned" is a very broad term and Wemple is absolutely right to suggest that it added nothing to the conversation and put a target on the backs of people of colour.  When Timothy McVeigh, blew up the Alfred P. Murrah Federal Building in Oklahoma City on April 19, 1995, Muslims instantly became a target for suspicion. It was quickly revealed that the perpetrator was a home grown While male terrorist and yet, we did not see a rash of suspicion aimed at White men. In a White supremacist society, White men who act out are considered an aberration, despite the violence they continue to engage in.

When POC are targets of violence, it most certainly does not get the attention it deserves in the media because it does not fit the narrative that Whiteness has created about who is the victim and who is the perpetrator. When incidents like this happen, Whiteness feels entitled to their bigotry and this is specifically why Heba Abolaban became a target.  In the wake of 9-11, I remember thinking how difficult it would be for Brown people and in the years since, I was proven correct.  Whiteness sees no distinction between people of colour and has created us as one homogenous group set on destruction.  There have been spikes in racial profiling and a reduction on civil liberties, all using the rhetoric of safety but none of this occurred after McVeigh.

I know I cannot be the only person of colour to feel relief upon seeing the images of Tamerian Tsarnaev and  Dzhokhar Tsarnaev on television.  They could not be more ethnically or genetically Caucasian.  So much for the "dark-skinned" threat King warned the world about.  Hyper White masculinity is a danger in this world and until that is understood, people of colour will always be seen as guilty and violent in every situation like this.
Posted by Renee at Friday, April 19, 2013