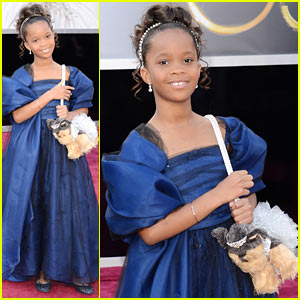 Nine year old Quvenzhane Wallis was nominated for best actress for her role on Beasts of the Southern Wild. Throughout all of the press and pressure, Quvenzhane has displayed a class and a grace well beyond the nine years she has been alive.  Unfortunately the White supremacist media has failed to show even half of her grace.  It all began when a reporter told Quvenzhane that they were going to call her Annie on the red carpet and she had to correct her and say that her name was not Annie but Quvenzhane Wallis. Seriously? Learn to say her damn name.  You cannot just erase people's identity.

If that was the only incident, it would have been insulting but bearable.  The Onion took the denigration of Quvenzhane Wallis beyond the pale.  During the show last night, someone on their tweeter feed tweeted:

Everyone else seems afraid to say it, but that Quvenzhané Wallis is kind of a cunt, right? #Oscars2013

Common sense must have suddenly appeared, as an hour later, the tweet was removed from the feed. At the time of the writing of this post, The Onion has yet to issue an apology. In what world is it ever okay to refer to a woman like that, let alone a nine year old little girl of colour? Despite all of her talent and success, Quvenzhane is still a child.


I have written many times about the fact that children of colour are not allowed the innocence and discovery that White children are, and nothing illustrates this better than the tweet by The Onion. Before Black girls can even understand the concept of racism and sexism, it is always squarely aimed at them, forcing them to confront the sexism and racism that will become a daily facet of their lives. There can be no doubt that this tweet constituted violence and a direct attack on her person. This tweet was about putting Quvenzhane in her place.  It was about letting her know that no matter her great talent and skills, she will always be a second class citizen in a sexist, racist, society by virtue of her identity.

The fact that The Onion deleted the tweet but did not feel the need to apologize speaks volumes.  On some level, they have to know that this tweet was inherently wrong but the failure to apologize suggests that they, like all biased institutions, exist with the power to shape and label people of colour in a way that ensures the continued existence and power of privileged people. All people may be created equal, but we are not all are perceived equal.  To reduce a nine year old girl to a disgusting vile slur says that quite clearly. Erasing the tweet, does not make the harm go away. Even when an oppressive act occurs, privileged people will still attempt to make it seem harmless and erase their culpability in the ongoing oppression by either denying impact, or suggesting that the marginalized person is being too sensitive.  The silence of the Onion convicts them more than anything. Clearly despite the volumes of tweets calling for an apology, they simply want this incident to be swept under the rug and disappear.  They know that society has a short attention span and will quickly move on to something else.

I for one refuse to be satisfied with them just deleting the tweet and having it quickly forgotten. To that end, I have started a petition on Change.Org and I ask you to please consider signing it and passing it on to your friends.  Let The Onion know that they cannot get away with calling a child a hateful slur.