Since beginning this blog, I have written about the desire of White people to pet us at will.  I have yet to meet a Black woman who doesn't have a story to tell about this inappropriate touching.  In the latest public incident, Sage Steele was interviewing UFC fighter Chael Sonnen, when out of the blue he requested permission to touch her hair.

Steele graciously leaned forward and Sonnen took a huge hand full for her hair and said, "I love your hair btw. Has that every happened to you before? Because everyone that sits in this chair is thinking it I assure you.  That's real hair people and it's very soft I might add."

Hey everyone, a few weeks ago we opened our home to a new undog (shush it's not denial), very aptly named Loki. 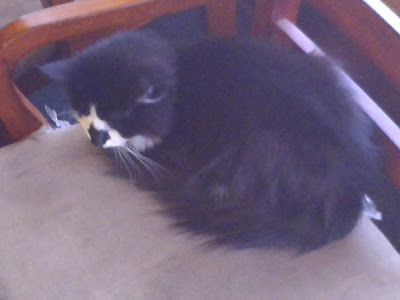 He's high energy and pure trouble. Already he has declared himself above the dog and drinks from poor Sookie's water bowl.  He also has zero manners when it comes to human food but we are working on it.

It's Time to Stop Fawning

I’ve written a post before about low expectations and why we need to expect more from straight, cis people. There’s a bare minimum of decent adult behaviour they should grow up and start observing

Well, the first step to ensuring that is to stop fawning over them for every damn little thing. There are a ridiculous number of straight, cis people who expect parades, parties and baked goods in responds to every remotely kind word or just an admission that they’re not bigots (well, claim not to be). It’s a ridiculously low standard and we have some responsibility for this – because we do praise people (and, on a related note but one I won’t go into here – media representations) for even the most paltry, weak efforts.

Now, this isn’t something I say to other GBLT people as individuals because I don’t approve of that. People have to negotiate their circumstances as best they can and everyone tends to know their own lives better than outsiders. One of the many aggravating things about being a marginalised person is policing from fellows about doing marginalisation/activism right

That’s not to say I’m not going to throw lots of criticism at a Quisling, I most certainly will, but nor will I shame people for the accommodations they have to make in their own lives and in their own contexts. We all have to walk our own roads and no-one knows what potholes, road blocks and black ice that lurk down yours but yourself. And if that means you have to fuss a few straight people and hand out cookies, even through gritted teeth, well you know the people around you and how you have to survive among them best

That changes entirely for professional advocate bodies which, for a huge myriad of reasons, I just have no time for, I really really don’t, not any of them. For every good thing they do, there seems to be a monumental shitton of crap they pull (which turns into a twofer of annoyance since their arseholery is annoying and then you get further arseholes who decide that I need to apologise on behalf of an organisation based on another continent – because, y’know, all gay people are collectively responsible for what every gay person does, don’tchaknow, and individuality is something only privileged people get).

Anyway, before I got derailed a little, let’s get back to fawning, because this is one of the many many things that I hate about these organisations that purport to speak for us. It seems like, to be “relevant” these orgs are usually more interested in appealing to the straight oppressors, to be part of the system than they are to be advocates for the people they’re supposed to be advocating. And one of the classic ways they do this is by not just handing out Cookies – but Cakes, tarts and a whole patisserie of pastries for the slightest damn reason. And it has to stop – stop making us cheap, stop making us easily bought, stop pretending we have to be appreciative for basic humanity – you have, annoyingly, far too large a platform to be handing out ally cookies so casually.