In The Aftermath of George Zimmerman's Release 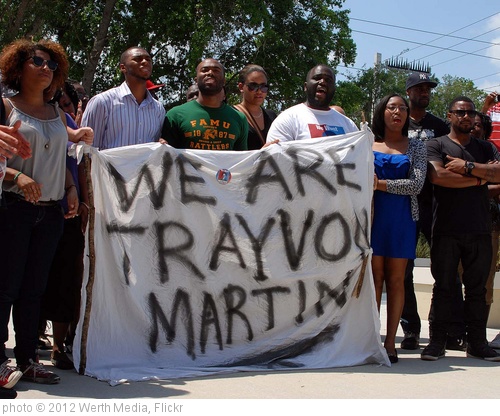 I awoke this morning to discover that George Zimmerman has been acquitted of second degree murder in the shooting death of Trayvon Martin.  I wasn't in the least bit surprised because for as long as I have been alive, Black life has been cheap.  It's a hard truth, but it's the reality with which I live, with which all children of the African Diaspora live.  The phrase "I Am Trayvon Martin" has become very popular and this is because he literally could have been any of us. Some worry that this verdict will embolden racists to target Blacks, but I wonder when have we ever not been a target? From chains to a Black president, Blackness continues to be under assault.

I find the only thing that brings me even the slightest bit of relief is the fact that I am Canadian and my sons are Canadian.  At 12, Destruction is five foot five and would not look much different from Trayvon in the same circumstances.  Like all mothers, I worry about his safety, but our much more rigid gun laws would more than likely mean that no neighbourhood watch cop wanna be, would take his life for simply existing. The glorification and absolutely masturbatory fascination Americans have with guns, combined with a White supremacist culture, which purposefully criminalizes and cheapens the lives of Black children before they can even take their first breath, are directly responsible for the violent unnecessary murder of Trayvon Martin.

Being a Canadian, I watched the circus of a trial unfold from a distance. There are most certainly large differences in American and Canadian law, though we share a symbiotic relationship in many ways, but what I saw before me was a farce.  George Zimmerman may have been accused of murder, but it was Trayvon Martin who went on trial. How is it that the person who ended up dead, and therefore unable to speak for themselves was criminalized? We learned about pictures of Trayvon Martin holding guns, about THC in his system and suspensions from school. It was not long before  he was turned into a drug dealing thug, who Zimmerman graciously saved the world from having to deal with.  What I want to know, is how is any of this is relevant to what happened that fateful night?  Zimmerman would have known none of this as he approached Trayvon, in direct contradiction of police instructions. The only thing that Zimmerman knew for an unequivocal fact, is that Trayvon Martin was Black.