Jaden Smith Says ‘School Is The Tool To Brainwash The Youth’

Jaden Smith recently took to twitter, to share his thoughts on education and as with anything the Smith kids do, an uproar was created. 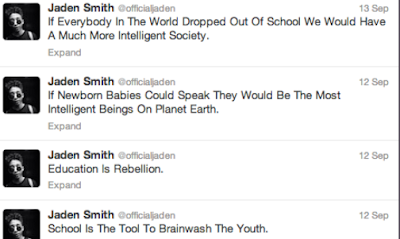 Jaden Smith has an immense amount of privilege.  Not only does he have two very rich parents, he is a star in his own right.  Because of all of his privilege, much of the conversation I have seen about his tweets were very much dismissive. Many people believe that Jaden is in a position to eschew education because of his class privilege.  Some are ashamed to see a Black child so openly espousing a negative view of school, when so many fought for years for the right to get an education.   There was after all a time when it was illegal to teach a Black slave to read.

The Smiths have faced a lot of public attacks about how they raise their children and I don't imagine this latest revelation by Jaden is going to help.  If we pause for a moment and put Jaden's privilege aside and think about the essence of what he said; he does have a point.

Schools, despite the best efforts of some really good teachers, do not exist to teach kids to think critically.  Children are instead forced to learn a very biased curriculum and often times, teachers are forced to simply prepare the kids to take standardized tests.  Most schools only focus on teaching the oppressors truth and the voices and experiences of marginalized people are completely erased.  It's no wonder that by the time children get to university, where they must think for the first time in their educational lives, so many struggle. 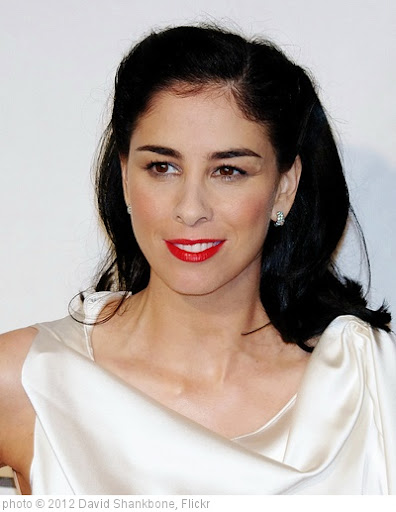 The more socially aware I become, the less tolerance I have for comic shock jocks. Sarah Silverman, who is marginalized as a woman in comedy, is certainly not afraid of using her heterosexuality and race privilege to attack others.  In many ways, she is clueless.  Silverman recently participated in the roast of actor James Franco.  The nature of a roast is to attack the honoree, as well as the other people on the panel, in the name of supposed good fun.  Anyone who has watched even a few minutes of a roast in recent years, knows that they are vapid and absolutely designed to be offensive. The entire point is for each comedian to be more shocking than the last and if they have to resort to an ism to hit the lowest common denominator, oh well.

Even knowing this, Sarah Silverman decided to participate.  Everything was fine until a joke about age was aimed at her and suddenly, this woman who has said and done some pretty homophobic and racist things had a problem.


Me being old, first of all, at the roast? — completely took me by surprise … Because it's personal, that is just so woman-based. I wasn't even the oldest one on that dais. I'm the same age as fresh-faced new star W. Kamau Bell! I feel like it's a part of, as soon as a woman gets to an age where she has opinions and she's vital and she's strong, she's systematically shamed into hiding under a rock. And this is by progressive pop-culture people! You know what I mean? It's really odd! I feel bad that it cut me. Because I should be like this about it (brushing her hand off her shoulder). I feel like your joke is that I'm still alive. My crime is not dying.

And I feel like, I just did this special and it made me think of something I said, which was — to so many women, especially when I watch Real Housewives — [muffled, through gritted teeth] which I watch, I wish I didn't, but I do — I just want to say, "Your heartbreaking attempts to look younger is the reason your daughter doesn't dream about her future!" (source)

Okay, Silverman has a point about age effecting women differently than men.  Women are indeed shamed and attacked to a greater degree and I agree there was a sexist undertone to the jokes about her age; however, am I wrong to not give a shit about this privileged woman's fee fees, when she spends her time attacking marginalized people for a cheap laugh and a paycheck?  Oh the hypocrisy, it burns.  The only reason Sarah lost her shit this time is because the joke was on her.  All of a sudden, she forgot about intent, or about the fact that this was supposedly a harmless little joke meant in good fun.  Isn't it interesting how the joke suddenly is not funny when it's aimed at her?

I have no sympathy for the woman who thought this was funny: 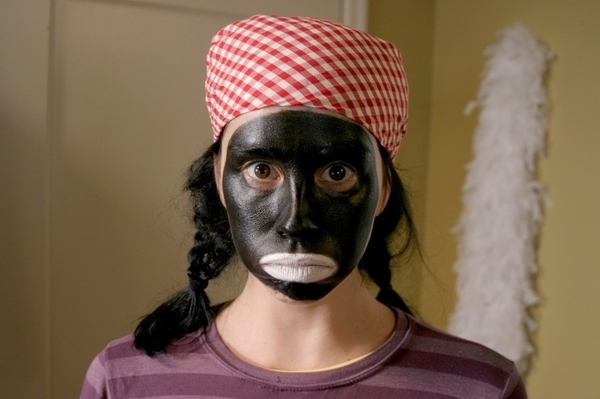